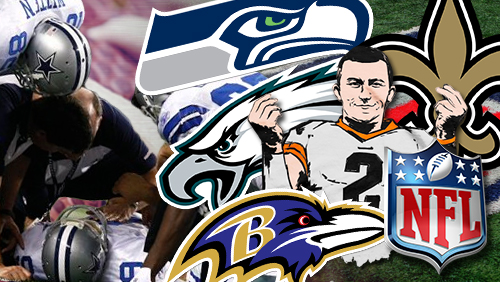 NFL favorites carried the day in Week 1 and they punished bookmakers as a result. Heavily backed teams like the Packers, Dolphins, Bengals and Broncos all kicked sand in the face the odds makers, making it one of the more their disastrous opens to an NFL season ever. There is a saying, though … something about the sun shining on a dog’s rear end. Well, yesterday it did.

It was, indeed, a dog day afternoon as the glorious beams landed in unusual places like Cleveland, Jacksonville, Oakland and Washington. Home dogs all, the Browns, Jaguars, Raiders and Redskins not only covered the number but they won outright.

Tennessee and St. Louis, the unlikely victims of uprisings in Cleveland and Washington, respectively, were especially hard on the betting public. The Browns horrible Week 1 showing, coupled with Marcus Mariota’s brilliant Week 1 dissection of the Bucs, had the public backing the Titans at 71-percent against the spread. The Rams, meanwhile, suckered 69-percent of the public’s money this week after their season opening upset of the Seahawks.

Only the Ravens and Dolphins garnered more public backing, hitting 79 and 80-percent prior to kickoff. Baltimore (-6) failed to escape the Black Hole, falling 33-37 to Oakland while Miami (-5) suffered a 20-23 loss to the usually toothless Jaguars.

Arguably the day’s biggest surprise, and one that brought plenty of smiles to books everywhere, was Tampa Bay spoiling New Orleans’ home opener. The Buccaneers, who were this week’s largest underdog (+10), thumped the increasingly hapless Saints 26-19 in the Bayou.

New Orleans drew 62-percent of the spread wagering total and it entered the game with 92-percent of the money line share. That’s a lot of public money funneling its way into odds maker’s coffers. And the Saints added insult to that injury by draining an ungodly number of survivor pools, including my own.

Books did not go completely unscathed, however. The Patriots, Cardinals and Packers saw to that. Tom Brady shut Rex Ryan’s mouth Pulp Fiction style, leading New England to a 40-32 in Buffalo, and Arizona slapped the Bears 48-23 at Solider Field. Green Bay capped off today’s action with a 27-17 win over the defending NFC Champion Seahawks.

The public liked the Patriots opposite the number at 72-percent and they were pounding the Cardinals and Packers at 75 and 61-percent, respectively.

That leaves the odds makers pining for a Jets win in this evening’s Monday Night Football clash with the Colts in Indianapolis. Andrew Luck and his cohorts are public darlings right now as 72-percent of the money says they will cover the seven point spread in tonight’s game.

Johnny Football emerges from the shadows to tighten Merril Hoge’s necktie. Manziel, who engaged in a bit of back-and-forth with the ESPN commentator this week, one upped fellow Heisman winner Marcus Mariota by leading the Browns to a 28-14  Week 2 victory. The much maligned signal caller completed 8-of-15 passes for 172 yards and two touchdowns in the win.

Manziel got the start in place of the injured Josh McCown, but his head turning performance, no doubt, gave Head Coach Mike Pettine something to think about when latter returns to health. That does, of course, assumes Manziel is thinking about something other than hitting the club all week.

The extra point now requires a little extra. The point after attempt has been a hot offseason topic for a while now, but this year the league actually did something besides blow smoke about the nondescript kick, increasing its distance from 20 to 33 yards. The decision has produced the desired result through two weeks of play, making the extra point something more than a mere formality.

The proof: An average of 17 PATs were missed per season between 1990 and 2011, but there were a total of nine missed in Weeks 1 and 2 alone and a game remains to be played. However, in spite of the unusual number of misfires this season, they have yet to affect the outcome of a game, either from an actual or betting perspective. Not yet anyway.

Dr. Jekyll or Mr. Hyde? Fans of the Ravens, Seahawks, Eagles and Saints are all wondering what to make of their teams after two weeks of action. Baltimore, Philadelphia and Seattle were all considered Super Bowl contenders prior to the start of the season and many pundits expected a bounce back campaign from New Orleans. Yet, they enter Week 3 a collective 0-8.

It is still too early to tell whether or not things have gone horribly awry for one or all of them, but the hand wringing and teeth gnashing should stop in Seattle next Sunday. The Seahawks welcome the Bears to CenturyLink Field for their home opener and an ass whipping is probably in order.

The other three clubs do not have it so easy, though. The Ravens will host the 2-0 Bengals, the Saints travel to 2-0 Carolina and the Eagles are in the Big Apple for a meeting with the Jets.

Will injuries halt the Cowboys drive for a title? One of the more lethal pitch and catch duos in the NFL, Tony Romo and Dez Bryant, is out of action due to a broken clavicle and broken foot. They are each expected to miss anywhere from 10 to 12 weeks, creating a great deal of uncertainly in Dallas, in spite of the team’s 2-0 start to the season.

If the Cowboys are to survive without them, the defense will need to become the team’s calling card. That notion would have floated like a boat with a million holes a couple of years ago, but it is not a preposterous one anymore. Since Rod Marinelli’s arrival in the Big D, the Pokes have evolved into a respectable stop unit.

In 2013, Dallas ranked dead last in yards per game allowed with a 415.3 average and it also allowed 27 points per game. Last season those numbers fell to 355.1 and 22, respectively, under Marinell’s watch. And through two games this season, the Cowboys are allowing 18 points and 257.5 yards per game.

So Dallas may be missing a bullet or two, but its still not firing blanks.