Sen. Del Marsh gives up on gambling bill, for now 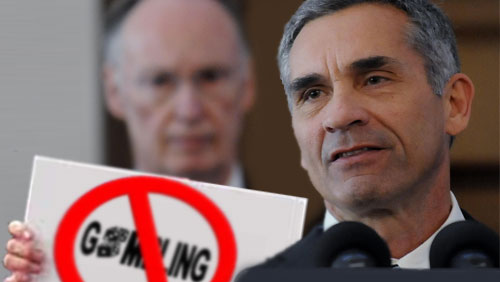 Alabama State Sen. Del Marsh’s gambling and lottery bill is off the table as a possible solution for the state’s budget shortfall.

Marsh announced that he would not push a statewide gambling and lottery bill during the legislature’s upcoming second special session, as Gov. Robert Bentley called the bill a distraction for legislators trying to resolve the budget shortfall. Taking gambling out of the picture leaves the Legislature with three choices: cut General Fund departments, raise taxes, or shift revenue from the Education Trust Fund.

Marsh also said that he will still decide whether he will reintroduce his gambling legislation during the next regular session which will start in February.

Marsh’s gambling bill, which could pave the way for a lottery and table gaming in Alabama was introduced during the regular session that ended in June. A report from Auburn University-Montgomery, which was commissioned by Marsh’s office, said the plan would raise $400 million a year – $330 million of that from a lottery – in addition to creating 11,000 jobs at casinos around the state.

Meanwhile, another Republican senator, Paul Sanford, said that he will introduce a lottery-only bill, to create the Alabama Recurring Revenue Fund, which will go to the state’s Education Trust Fund and the General Fund. The plan would also use established multi-state lottery games to save expenses on startup and marketing.

It’s neighbor state Tennessee, which lottery, has posted a record sales for the 11th consecutive year. The Tennessee Education Lottery Corporation posted a 4.1% increase to $1.475b in total sales for the period from July 1, 2014, through June 30, 2015. The recent fiscal year’s resulted in a contribution of $347.7m for all education programs funded by the lottery.

“There’s a lot of people that want the opportunity to buy lottery tickets without crossing the state line,” Sanford said. “They want to see the money used here in the state [Alabama].”

The second special session is expected to be called within the next two weeks.