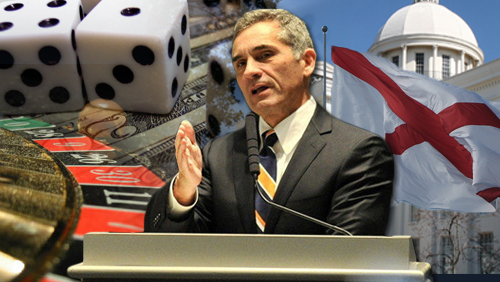 Marsh’s gambling bill, which could pave the way for a lottery and table gaming in Alabama, opposes Gov. Robert Bentley’s tax plan. Both bill were introduced during the regular session that ended in June but neither passed.

Citing the results of a study by Auburn University in Montgomery, Marsh said that implementing a lottery and Las Vegas-style gambling would create $400 million in new revenue for the Alabama General Fund and add 11,000 new jobs for a total $1.2 billion economic impact. The bill would also allow four casinos in Birmingham, Mobile, VictoryLand and Greenetrack to operate table games such as poker and blackjack in addition to electronic bingo.

Marsh’s plan would also establish a gaming commission to regulate the casinos and establish the rules under which they would operate.

Meanwhile, Bentley proposed a tax plan that would raise more than $300m in taxes, lower than the $541m fair tax package that he originally submitted during the regular session.

Marsh, in an interview with Yellowhammer Radio, opposed Bentley’s proposed tax increase, saying that Alabama has not been in a recovery mode since the 2008 recession and increasing the tax would not be a good idea. He also pointed out that he does not believe that expanded gambling would not be a solution to the budget shortfall but it should be included in the “economic development and incentives conversation.”

“I do not think gaming is the solution to the General Fund, period. What I do believe is that gaming is an industry that we are not receiving fair revenue from in the state. I could care less if we have it or if we don’t. But if we’re going to have it, we should get our revenue,” said Marsh. “The solution we will propose in August will not have gaming as the savior for the General Fund. But I do think gaming is an issue we should be discussing and let the people of this state make a decision at some time whether we are going to have it or not.”

Legislators met for about 15 minutes and then adjourned until Aug. 3, saying committees needed time to work on budget ideas.

Meanwhile, the Poarch Band of Creek Indians has released an ad campaign to push the tribe’s proposed compact with the state, offering $250m in revenue to cover the fund shortfall.

A minute-long TV ad aired on local stations in Alabama on Tuesday, saying that a compact with the tribe has been discussed for years and would generate revenue and fix the deficit mess but Bentley disagreed.