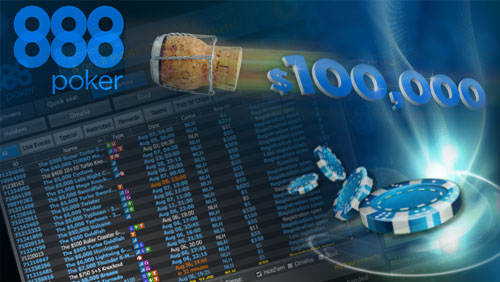 888Poker continues to butter up their player database during a critical bout of connectivity issues by upping the monthly guarantees by $100,000.

It’s a tough time in the 888 household of late.

When they announced plans to acquire Bwin.Party Digital Entertainment, a move that would turn them into an online gambling superpower, champagne corks were being sheared off with swords like chicken heads in a slaughterhouse.

It was all gravy.

And then there are the down days. The times when everything’s shit; it rains every day and the grey clouds chase you down the street trying to drown you in forgetfulness.

Take connectivity issues as an example.

Watching your computer freeze, whilst playing a crucial hand of online poker, is not too dissimilar to having sex with your wife and then arguing with her mid stroke. In both cases you never get to finish. In both cases you find yourself hammering away in the dark trying to solve the situation. You have no control. That’s what aches the most.

888Poker understand they have a real problem on their hands at the moment. Poker players will leave to find more secure pastures if their recent connectivity issues cannot be resolved.

In a bid to deal with this issue 888Poker created a ‘tournament pause button’ that enabled them to freeze the action across their tournaments when disconnect issues became so problematic that further investigation was needed.

The latest move designed to cling onto customers is an increase of guarantees across a wide range of tournaments – $100,000 per month to be exact. The most significant increase will be realized in The Quarterback with the guarantee rising from $25,000 to $30,000. The Sunday Breeze and the Tuesday Crocodile will see their guarantees raised from $15,000 to $20,000. Five other events will have their guarantees raised. This comes a month after 888Poker dropped their $100,000 guarantee on their Sunday Challenge to $75,000. That guarantee remains unaffected by the changes.

To be fair 888Poker is not the only site that seems to be plagued by disconnect issues. In fact, it seems only PokerStars and Full Tilt is able to escape the DDoS attacks that nobody is claiming are DDoS attacks.

A tournament pause button is a start, increasing the guarantees is a kind gesture – I just hope that 888Poker are spending the right amount of time, and money, on fixing the actual problem. One that is fixable as Amaya Gaming can testify.