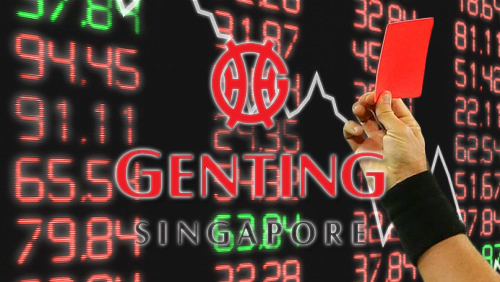 Shares of Genting Singapore dropped 8.3 percent—its lowest in six years—after the casino operator warned of a “significant” fall on its second quarter results.

The company, which operates Resorts World Sentosa, said Tuesday that it expects a substantial decline in net profits for the second quarter of the year. Genting is expected to release its earnings report on Aug. 13.

In a statement to the Singapore Stock Exchange, Genting attributed the expected profit slump to “fair value loss on derivative financial instruments as a result of unfavorable market conditions and unrealized foreign exchange translation losses.”

Genting’s below par performance can be attributed to the downturn in gambling by mainland Chinese, which is affecting not only Singapore, but Macau casinos as well.

Union Gaming Group analyst Grant Govertsen told Bloomberg, “Currency headwinds has been plaguing Singapore gaming operators for quite a while from all their primary segments such as China, Indonesia and Malaysia. That has been impacting results over the past several quarters.”

Genting’s net profits plunged 73 percent to $62.7 million in the first quarter of 2015, while revenues fell 23 percent to $639.2 million and gaming revenue dropped 26 percent year-on-year to $494.9 million. At the time, the company said its VIP gaming business “continues to come under stress due to regional environmental factors.” Genting also warned that it doesn’t expect “any respite in the medium term.”

And Genting wasn’t the only one. Casino giant Las Vegas Sands, which owns Marina Bay Sands, reported in July that the Singapore casino resort’s revenue suffered a 11.4 percent fall to $713 million in Q2 2015 and a 13 percent plunge in Ebitda—a measure of profit before tax, interest and other items—to $363.3 million.

Marina Bay Sands and Resorts World Sentosa are among the world’s most profitable gaming venues, accounting for between 1.5 percent and 2 percent of Singapore’s gross domestic product and created over 20,000 jobs. Despite this, the government has no plans to open the casino market when these two integrated resorts’ licenses expire in 2017.

Resorts World Singapore lays off as many as 2,000 employees
Derek Tonin
16 July 2020