The timing was pitch perfect.

In a week where misogyny infected poker like a rotten tooth, Loni Harwood rode into Harrah’s Cherokee in North Carolina and took down the 2015 World Series of Poker (WSOP) National Championships with surgical precision. 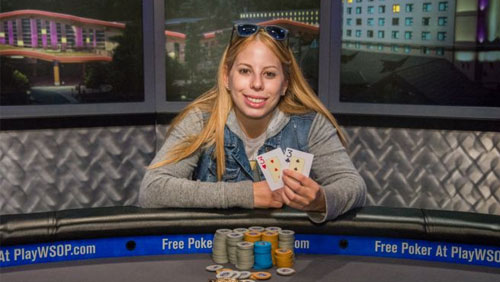 Harwood picked up $341,599 for victory in this one. She has now earned over $1.6m in live tournament earnings, and the two gold bracelets will look pretty pristine amongst her two WSOPC gold rings.

The fifth iteration of the WSOP National Championships was held in North Carolina for the first time. It will be the last time the event retains its 100% U.S. flavor as the sixth season sees an expansion into other areas of the globe.

The star attraction was, as always, Daniel Negreanu. His 11th place finish in the WSOP Main Event captured the imagination of every poker fan, and he broke off from his tour of California, to promote iPoker in the state, to play in this amazing event: Kid Poker eventually finishing in sixth place.

There was also a berth for Darryll Fish who won his seat after winning the WSOPC West Palm Beach Main Event for $173,189 earlier in the year. Fish finished third, and although he will be disappointed not to capture the gold, he must be happy with a 2015 haul that is his best since 2011.

The heads-up action fell between Harwood and WSOPC gold ring record winner Alex Masek. The eight-time WSOPC ring winner started the final table with only 10 big blinds. Masek must have had mixed emotions. $211, 599 is a lot of money when you are starting out with a shoving stack, but he still hasn’t been able to earn himself a bracelet.

After her victory Harwood was keen to sing the praises of her brother Scott.

“I wanna shout out to my brother, Scott Harwood. He’s one of my best friends. He’s always there for me. He wanted to be here today, but he works and he couldn’t get the day off. He’s been on the virtual rail and I’m sure he’s waiting for a phone call right now.” Harwood told WSOP after her win.