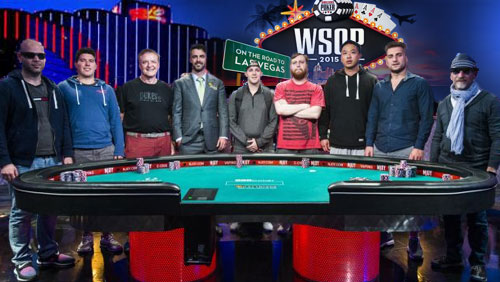 The World Series of Poker Main Event final table has been set and the most famous player in modern history failed to make the grade by a cat’s whisker.

The number 11 has been seared into the heart of Daniel Negreanu by a branding iron that will burn for a long while yet. That’s the position he fell in his attempt to win the 2001 Main Event, and history repeated itself yesterday as the poker community was preparing itself for a Main Event without the most famous face in poker.

The Holy Grail of poker attracted 6,240 players, and after seven days of scintillating action, only nine remain. The clock has been stopped, the chips have been stowed, and the players sent to do their thing until being recalled on November 8th where they will compete for a $7.6m first prize.

Here is the run down of exits, eliminations and evictions.

Action started slowly. There wasn’t a single elimination in the first level of the day. Instead, double-ups were on tap, the most significant seeing Max Steinberg’s pocket aces double through the pocket eights of Daniel Negreanu.

Matt Guan took the chip lead into the 31st level.

The first player eliminated was James Magner. He moved all-in on [Qd] [Jc] [4h], holding [Kd] [Td] for the open-ender, and Patrick Chan made the call holding [Ad] [Tc] for ace high and a gutshot. It held. Magner was out in 27th place.

Chad Power followed in 26th after his A2o failed to beat the KJo of Anton Morgenstern, and then we lost one of the most talented players left in the field as Fedor Holz failed in his attempt to win the World Championships of both the live and online arenas when his A9 lost out to the 88 of Guan.

Christoph Brand was eliminated in 24th place when his pocket treys were rivered by the [Th] [8h] of Thomas Cannuli, Blake Bohn left in 23rd place when his A8o ran into the pocket aces of David Peters, and Anton Morgenstern exited in 22nd place in a three way all-in that saw his pocket tens bested by the pocket kings of Josh Beckley. Mario Sequeira’s AJ was the third hand in that equation. Morgenstern finished 20th in 2014.

Joseph McKeehen took the chip lead from Guan at the end of the level.

Mario Sequeira was the next to fall in a four bet pot against Pierre Neuville. The Belgian getting fancy with [Kc] [6c], and Sequeira paying the ultimate consequences for only flatting with the pocket queens pre flop when he moved all-in on a KT7 board only for Neuville to call holding top pair.

John Hinds finished in 20th when his [Ac] [Tc] lost out to the pocket kings of Beckley, and Erasmus Morfe was our 19th place finisher when he lost a flip against Thomas Kearney AK<77.

And then there were two tables remaining.

That elimination gave Neuville the chip lead with 15 remaining.

The overnight chip leader Thomas Kearney was eliminated in 15th place when his pocket queens couldn’t beat the [As] [Ts] of Cannuli. A flush on the turn sending Kearney home.

Then we lost the talented Justin Schwartz in a cooler of a hand. It was a three way limped pot that saw Schwartz move all-in holding a set of treys, and McKeehen calling holding a set of sixes. Negreanu ended the level by doubling up against McKeehen 44>A7 and hope sprang eternal for the Kid Poker fan club.

McKeehen led the final 13 players with over 40m chips,

Matt Guan was eliminated in 13th place by Frederico Butteroni QQ<AA, and George McDonald was unlucky to fall in 12th to Zvi Stern when his queens were cracked by [Ts] [8s] after a flush hit the turn.

McKeehen was still in the lead with 11-remaining.

Then we had the moment that ended interest in this event for so many people.

McKeehen opened the button to 800k and Negreanu defended his big blind. The flop was [Ad] [Kc] [Td] and Negreanu check-raise jammed for 5.8m after McKeehen had bet 700k. The chip leader called, and it was [As] [4d] for top pair for Negreanu, and McKeehen held [Jd] [3d] for the flush and straight draw. The turn card was the [3h], but the [Qh] on the river handed McKeehen a straight, and sent Negreanu tumbling to the floor with his head in his hands. The main man was not going to be in the main event final table.

A single table of 10 was set up, and Alex Turyansky was handed the title of November Nine bubble boy after who else but Joe McKeehen went him to the rail after winning another flip QQ>AK.

Here is the seating assignments for the Nov 8th clash, scheduled to air live on ESPN.