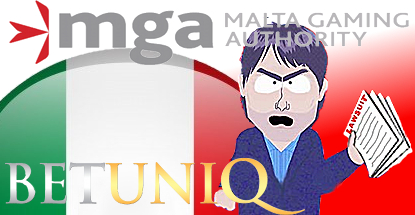 Over the weekend, Malta Today reported that three Italian firms – Uniq Group Ltd, Betsolution4U Ltd and FenPlay – have challenged the suspension of their licenses by the MGA. The firms are threatening to sue the regulator for millions of euros in damages if an investigation into their operations produces no hard evidence of shenanigans.

Late last month, Italian authorities launched a major crackdown on of the Betuniq betting brand, which ran over 1,500 retail outlets offering online connectivity to Malta-licensed betting sites. The Italian authorities have accused the firms of being part of a sophisticated money laundering scheme orchestrated by the ‘Ndrangheta crime organization. The Italian action led the MGA to immediately suspend the licenses of Betuniq and Betsolutions4U, while Fenplay was similarly suspended last week.

The brouhaha also has ties to Maltese politics. David Gonzi, the son of Malta’s former prime minister, is listed as one-third shareholder in GVM Holdings, a Maltese firm that provided fiduciary services for the Betuniq operation. Attorney Mario de Marco, the deputy leader of Malta’s Nationalist Party, is leading Fenplay’s legal challenge of its license suspension.

Meanwhile the Malta Independent reported that the Malta Police Force, which up to this point had been acting on a European Arrest Warrant issued by Italian authorities, has launched its own investigation into alleged links between the Maltese firms and the Italian mobsters. The news follows Finance Minister Edward Scicluna’s announcement last week that the government was conducting a review of the MGA’s due diligence practices.

Since the story first broke, the MGA has defended its due diligence regarding the beneficial owners of the Malta-licensed operators. The MGA even told the Independent that licensees were prone to criticizing the MGA’s background checks as “too onerous.”