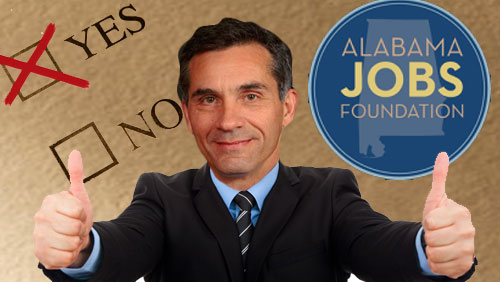 The Alabama Jobs Foundation (AJF), a group of businessmen working for passage of bill to allow lottery and casino gaming in the state, have presented data showing that Alabamians want an opportunity to vote on potential lottery and casino expansion.

The poll, which was released on Monday found that: 89% of state voters want a vote on gambling; 80% support a lottery for education; 69% support a gambling/lottery constitutional amendment. 77% support a gambling compact between the state and the Poarch Band of Creek Indians and 66% oppose new taxes to solve the state’s current budget crisis.

Gambling expansion has been a hot topic in Alabama for years. State Sen. Del Marsh has introduced a bill that will pave the way to legalize gambling at four sites across the state and create a lottery that will generate $400 million for the state’s coffers, 11,000 new jobs and an economic impact of almost $1.3 billion.

Now, with the ever growing budget crisis, gambling has even become a bigger issue with the Poarch Band of Creek Indians joining the debate, by offering the state $250 million to bail out the budget shortfall in exchange to exclusive rights for casino gaming.

“This poll gives us every reason to be optimistic as we go forth in our efforts to promote passage of a constitutional amendment that is being proposed by Sen. Del Marsh,” said AJF Executive Director Chip Hill.

Marsh said that he is not surprised with the numbers as he had ran this poll by another polling firm to check legitimacy of the results. He also pointed out that legalizing gambling and creating a lottery will not solve the state’s budget for 2015, but it is a long-term solution to the state’s budget issues.

TargetPoint Consulting of Alexandria Va, which conducted the poll, questioned 809 registered voters in Alabama from July 21 through July 23. The result has a 3.45% margin of error