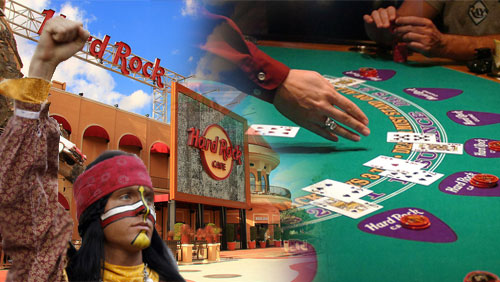 The director of Florida’s Division of Pari-Mutuel Wagering Ken Lawson sent a letter to the Seminole Tribe on Monday asking how it planned to shut down its table games.

The Seminole’s gambling compact with Florida has the tribe pay about $250m a year for the exclusive right to deal house-banked table games such as blackjack and baccarat at its seven casinos including Seminole Casino Coconut Creek, Hard Rock Hotel & Casino and Seminole Classic in Hollywood. Terms of the agreement state that the tribe will have to fold up the tables and put away the cards within 90 days of the compact’s expiration on July 31.

“The letter was actually expected and is just another part of the process,” said Seminoles spokesman Gary Bitner.

Seminoles maintain that the state has already breached the compact by allowing racinos in South Florida to operate electronic versions of the games that the Tribe operates with live dealers, therefore, the tribe will continue to deal the games as the efforts to get a compact extension go into mediation and probably a federal court suit.

On June 25, Tribal Council Chairman James Billie asked the state for a meeting to resolve the dispute within 30 days. That timeline expired on Saturday, which is why another letter was sent on Monday saying that the state has missed another deadline to find a resolution for its gambling compact dispute.

The letter was sent to Gov. Rick Scott, Florida Senate President Andy Gardiner, Speaker of the Florida House of Representative Steve Crisafulli and members of the media, requesting mediation within 30 days.

Sen. Bill Galvano, one of the lead negotiators with the Tribe on the original gaming compact, told reporters Monday that he still believes that the agreement will resume with the Tribe, as they were in the same situation in 2010 when the first compact was invalidated by the Florida Supreme Court. The court ruled their table games in violation of state law and the tribe negotiated a new deal with the Legislature.

“I don’t think it necessarily means we are headed for litigation,” said Galvano. “This is similar to the position we were in last time before we were able to enter into a deal. I think the state has significant leverage at this point and there’s nothing to preclude us from having those negotiations.”

The federal court has a 180-day period to assume jurisdiction of the agreement, which runs out Oct. 29.