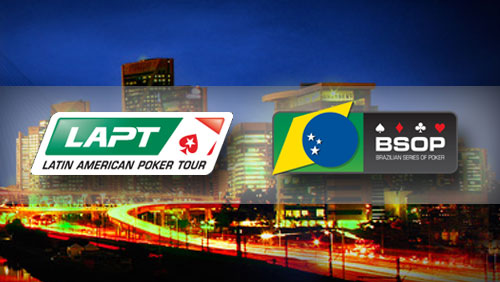 PokerStars has announced plans for the Latin American Poker Tour Season 8 Grand Final to merge with the Brazilian Series of Poker Millions in what promises to be the most earth shattering poker series in Latin American History.

Zico might have been cool cos he curled free kicks into the top corner whilst scratching his cock. I didn’t care about that old nonsense. He was cool because he was called Zico.

Brazil was the first Subbuteo team I bought and I polished Zico’s spherical bottom with Pledge. I loved the languid couldn’t give a fuck style of Socrates, and the veins popping out of the arms of Falcao were like tributaries running down a map of a whole new world for me. A world where to be Brazil meant being the Daddy.

The Brazilians nearly broke the Rio Mothership during Thiago Nishijima’s World Series of Poker (WSOP) bracelet win, Ronaldo the Elder is a part of Team PokerStars, as is the little genius called Neymar Jr. If they keep going at this rate they will have to paint the spade yellow.

PokerStars have more news of a Brazilian flavor this week. The PokerStars.net Latin American Poker Tour (LAPT) will be collaborating with the Brazilian Series of Poker (BSOP) Millions for their Season 8 Finale.

Igor Federal, CEO of the BSOP is expecting the merger to produce a record number of players, after citing a ‘218% increase in tournament entries since last year’. PokerStars Team Pro, Andre Akkari, believes that with the added help of Neymar Jr. promoting poker as a sport throughout Latin America the ‘competitiveness of the events will strengthen.’

LAPT Uruguay is the buffer between this piece of writing and the Grand Final. The Enjoy Conrad Resort & Casino, Punta del Este will host that event Sep 18-22.

Last year Wilson Calixto beat 2,749 entrants to win the $420k first prize in the BSOP Millions Main Event. It was the biggest event ever held in Latin America with more than 15,000 tournament entries and more than $6.6m handed out in prizes.

I can still smell the Pledge.