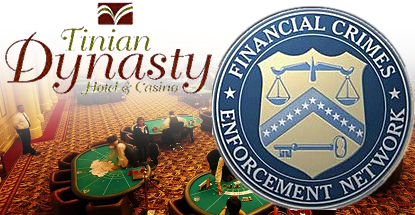 America’s financial crimes watchdog has issued a hefty fine on a casino operator in the Commonwealth of the Northern Marianas Islands (CNMI), a US territory in the south Pacific.

FinCEN director Jennifer Shasky Calvery said Tinian Dynasty “didn’t just fail to file a few reports.” The casino operator neglected to file “thousands” of currency transaction reports (CTR) and management “willfully facilitated suspicious transactions and even provided helpful hints for skirting and avoiding the laws in the US and overseas.”

FinCEN sent undercover agents posing as high-rollers to the casino, where management agreed to their requests to avoid reporting high-value currency transactions. A 2013 search of the casino’s premises turned up “a stack of more than 2k unfiled CTRs” but the casino’s chief auditor claimed “nobody ever noticed that [the CTRs] were not being filed.”

FinCEN’s fining of Tinian Dynasty came mere days after a CNMI judge ruled that the US Department of the Treasury has the authority to regulate the archipelago’s casinos. The US gov’t had filed criminal charges against Tinian Dynasty in November 2014, but the operator sought to dismiss the charges on the grounds that Congress hadn’t granted the US treasury the right to oversee the CNMI’s gaming sector.

FinCEN’s interest in the casino sector has significantly ramped up since Shasky Calvery gave a speech at the 2013 Global Gaming Expo in Las Vegas, during which she warned operators that “reluctant compliance with the bare minimum” of AML requirements would no longer be tolerated.

Since that speech, which followed hot on the heels of Las Vegas Sands paying over $47m to avoid prosecution on AML issues, FinCEN has dinged Atlantic City’s Trump Taj Mahal for $10m and is preparing to fine Caesars Entertainment up to $20m for AML lapses at Caesars Palace in Las Vegas.