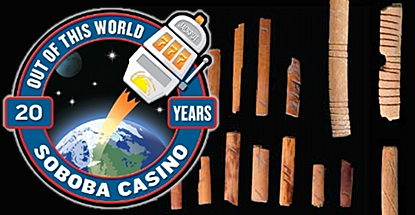 Archaeologists believe a cave in Utah may contain the remnants of North America’s oldest tribal casino.

Among the artifacts found in the cave near Great Salt Lake are hundreds of primitive dice and carved sticks, hoops and darts dating from the late 13th century. The University of Alberta’s Prof. Jack Ives told Western Digs there might be thousands more such items in the cave, making this find “unparalleled in western North America.”

Ives said the cave-dwellers, dubbed the Promontory Culture, apparently lived in relative affluence to some of their neighbors and thus had time to devote to leisure activities such as gambling.

In comparison to modern dice, the versions found in the cave were split pieces of cane marked on one side only. Up to eight dice were thrown simultaneously, with points awarded for however many landed with their marked side facing up, and the first person to reach an agreed upon total declared the winner.

Other games involved a netted wooden hoop and feathered darts, in which one contestant rolled the hoop and the other contestant attempted to ‘thread the needle’ while the wheel was in motion.

Alberta doctoral student Gabriel Yanicki said dice games were traditionally played by tribal women for low stakes, such as “items of personal property or, quite commonly, to decide who had to do chores like cooking.” However, far from being passive observers, men are believed to have wagered on the outcome of these women’s games.

Yanicki said these games were occasionally played for much higher stakes, including as a means of settling disputes with rival tribes “in lieu of more hostile interactions, such as warfare.”

CALIFORNIA TRIBAL CASINO SENDING SLOT INTO SPACE
Moving from the distant past to the near future, California’s Soboba Band of Luiseno Indians has announced plans to celebrate the 20th anniversary of its Soboba Casino in San Jacinto by becoming the first casino to launch a slot machine into space.

On June 14, non-profit independent space program and research organization JP Aerospace will launch an Airship To Orbit (ATO) mission from Lovelock, Nevada. The payload of this mission will be a Soboba slot machine dubbed Icarus, a collection of 20th anniversary Club Soboba cards and a time capsule filled with items selected by casino staff.

The payload will ascend 20 miles above the earth’s surface before returning to earth, after which the cards will be distributed to guests at an Out Of This World Party at the casino on June 27. The time capsule will go on display at the casino until it’s opened in 20 years time.