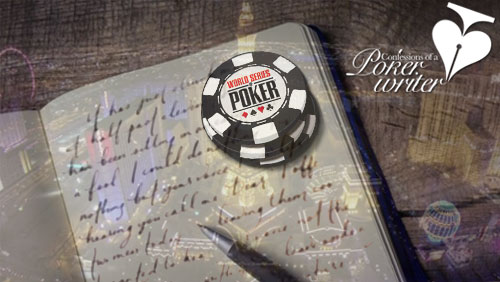 Lee Davy turns his confessions series into a World Series of Poker diary. In installment one he describes how shit it feels when you get knocked out of a WSOP event.

I look down at my watch. It says, ‘Now.’ I don’t want to be in the now. Now feels like Ebola. People are looking at me with puppy dog eyes. I have enough food for 15-levels. I feel homeless. I have nowhere to go, and I don’t know what to do with all of this food.

The journey to the World Series of Poker (WSOP) started on Monday. I took a flight to Los Angeles with my wife. We would spend one night with her family, and then drive a hire car to Vegas – our home for the next six weeks.

We weren’t sitting together. The flight was full. I ended up sitting next to a strange guy. He earned his ‘strange’ moniker because he read the Financial Times and didn’t watch a single movie for 11-hours. I mean what kind of psycho acts like that?

The only time I looked at him was when he was served olives and hummus. He spat an olive out of his mouth. At least I thought it was an olive. It landed in my general direction. He pretended I didn’t see it. I saw it. A few hours later and the ‘fasten seatbelt’ sign came on. I grabbed mine and got a handful of chewing gum. It was on my seat. It was on my ass. He saw it, then pretended he didn’t see it. I didn’t say anything. I mean, who wants to fuck with someone who sits on a plane for 11hrs and doesn’t watch a movie?

We landed in LA, what a fucked up airport.

I stood in line with a hundred others. All of us brainwashed by video footage of overly polite customs officials. They were laughing and smiling. I looked down at the ‘real thing’. There were no smiles. Nobody was laughing.

“Who goes on a vacation for six weeks?”

“Are you trying to be funny?”

“Do you have proof of your return journey?”

“Because I have only just landed.”

“Are you trying to be funny?”

“How much money do you have?”

“You come on holiday for six weeks and don’t have any money.”

“You have cash machines right….sorry…I was trying to be funny.”

He eventually realized that I wasn’t a terrorist and let me through, not before informing me that I didn’t have to stand in queue for an hour. I could have walked in with my wife.

Was he trying to be funny?

We headed to a Korean BBQ joint, ate too much food and went to bed. A few hours later and we were driving to Vegas. Our first stop was the Rio to register for the Casino Employee Event, and The Colossus. It wasn’t a great experience.

For many people the WSOP is the highlight of their lives. The first time I played here I was like a little kid, and not much has changed. So to queue for 90-minutes to register, is not a good experience. Even people who had pre-regged online stood in queue for 90-minutes only to be told that they could not collect tickets. There was four people dealing with a barely negligible casino queue, there were five people dealing with a non existent Total Rewards queue, and only two people (one learning) handling a queue of 50 people. It was a simple thing to solve, and nobody was on hand to solve it.

At least I could watch the basketball while I waited. I don’t understand basketball. A woman in the queue ahead of me sat down to play roulette whilst she waited. It was a good move. She only bet the number 26, and it came in three times during her 30-minute stint. The argument started inside my head. The little monster telling me to play. The angel telling me to leave it the fuck alone. The end of the line saved me. I had my two tickets. It was time to play some poker.

The next day my wife drops me off at the Rio. She gives me a big kiss and tells me I’m the best. It was a mum, son, first day at school moment. When I’m nervous I sweat a lot. I was sweating a lot. I was on time. I never understand people who aren’t. Jack Effel grabbed the microphone and told everyone in the room how special they were. I already knew that. My wife had just told me. Last years Casino Employee of the Year announced Shuffle Up and Deal, money didn’t rain from the roof, and we were off.

I had a great first level. At one point, when playing six-handed, I looked down at AJo, AKhh, AQo, AJss and AJo. The table must have thought I was a maniac. I started the level with 5k, and ended it with 6.5k. I was shaking when handling my chips. It’s not like I haven’t played poker before, but this is the WSOP. I’m sure the more I play these things, the more natural it will become, but for now I feel like a pig in shit.

The second level was a disaster.

I had identified the two players at the table I wanted to play with. In the following hand I got to play with them both. A weak player opened to 325 in early position, I flatted on the button with [7d] [6d], and the small blind also called. The flop was [Kd] [Qd] [6s], and the small blind led for 1,125. It was a big bet. I had 5.5k. The original raiser folded, and I decided to call. The turn card was the [3c] and he bet 2,750. He looked so strong. I decided to muck my hand. He later told me that he had flopped a set of sixes. I believe him.

And then it was over.

A weak player limped in early position, and I raised to 500 from position with pocket queens. He called and then led into a [As] [Kc] [Ts] flop, and I decided to fold. Then I looked down and see pocket kings. I opened to 325, the small blind made it 700, I moved all-in for 2,400, and was delighted when he called.

I tabled the kings. He screwed his face up. I felt good. He showed pocket Jacks. I felt like King Kong.

“Standard,” came a voice from around the table.

He has the jack of spades. I have a minor heart attack. I look at my hand and see the [Ks]. I relax. This is my time.

I pick up my pebble from the felt. It says ‘Dream.’ I don’t dream but I start to think.

“I can’t believe I have all of this food…I have to text Liza and tell her I am out…she will think I am a donkey…I have to e-mail my backer and tell him I’m out…he will think I’m a donkey…this is so shit…what am I supposed to do now…I don’t want to do anything…I just want to curl up in a ball and stab my bell-end with a chopstick…I don’t have any chopsticks…I do have a spoon.”

I walk over to the media room and write this. As I do I people come over to me; friends I haven’t seen for a year. I tell them my bad beat story. They laugh. I laugh. Suddenly, I feel great. I even consider heading to the bathroom and pulling the spoon out of my Japseye.

Confessions of a Poker Writer: Getting The Sack
Lee Davy
8 January 2016

Confessions of a Poker Writer: Searching For The Energy
Lee Davy
10 December 2015

Confessions of a Poker Writer: The Library
Lee Davy
26 November 2015
.