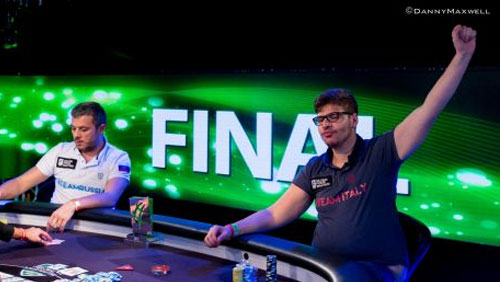 In 2014 he became the first player to win two side events at the same Aussie Millions festival, when he topped fields of 1,302 and 494 players in differing variants of No-Limit Hold’em (NLHE) events.

Earlier this year he joined a team of firsts when Team Italy won the inaugural Global Poker Masters (GPM) in Malta. And he has just topped both of those feats by becoming, I believe, the first player to win the Spring Championships of Online Poker (SCOOP) High Main Event and the Full Tilt Online Poker Series (FTOPS) Main Event in the same season.

Incredibly, it’s his second seven figure score this month after winning over a million bucks in the €50,000 NLHE Super High Roller at the European Poker Tour (EPT) Grand Final in Monte Carlo.

He is, quite literally, one of the hottest players in the world, and seems destined to have a great World Series of Poker (WSOP). Last year he made three final tables finishing seventh, fifth and fifth.

Christian ‘eisenhower1’ Jeppsson is another online powerhouse, and he would follow Deeb to the rail in sixth place after his king-jack failed to find the overcards needed to overcome the pocket deuces of Patel.

The heads-up encounter would fall between Kanit and Patel. The Italian held a big chip lead (7.6m v 2.7m), and both players were searching for their second SCOOP title. The hand count crept into double digits when this happened.

Now that’s how you finish off a tournament.

Kanit has now earned over $4m playing online, and $3.7m playing live. He is currently the No. #1 ranked Italian player in the Global Poker Index (GPI), and ranked No. #11 worldwide.