Home / Poker / Becky’s Affiliated: Why charity poker tournaments are important for our industry 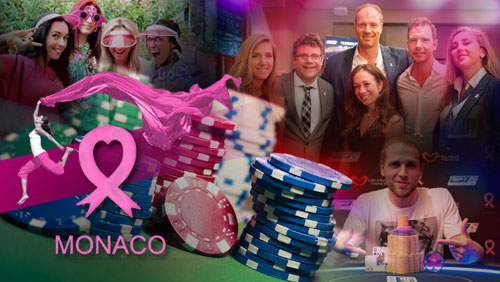 As an online gambling industry professional, I’ve been attending big poker tournaments around the world for the past ten years of my life. Seeing as I’m not a person who plays poker for a living, my business objectives at tournaments are to mix with and interview interesting pros, mingle with celebs and perhaps participate in a more casual event or two.

The charity tournaments taking place around these big poker events have always been an ideal opportunity for me to meet my business objectives and are simply a lot of fun for everyone.

This past weekend I was in the South of France visiting Charles Gillespie and Roberto Savio of Adge, during which time Savio’s wife Natasha Frost-Savio hosted the Poker for Pink Monaco charity tournament alongside the EPT Main Event.

Poker for Pink Monaco, founded in 2011 by Frost-Savio, is a charity tournament inspired by the Pink Ribbon movement, an event designed to raise awareness of breast cancer while also promoting a healthy lifestyle.

“Poker for Pink Monaco is very special to us as it embodies everything we want Pink Ribbon to represent. Poker attracts such a vast crowd, it seemed evident that to spread a message, the best place would be an event attracting both men and women, of all ages and social circles”, said Frost-Savio.

Charity poker events also attract poker industry professionals, such as myself, who are often attending the larger poker tournaments for business.  Alex Dreyfus, a well-known professional in the poker world, decided to join in on the Poker for Pink Monaco festivities.

“I always go to EPT for work purposes and meetings concerning my business, Global Poker Index, but I like to play 2 or 3 times a year poker, usually at charity events because they are more fun at the tables”, said Dreyfus.

“I enjoyed my Poker for Pink Monaco table, I had Sean Astin (Lord of the Rings and Goonies) and Liv who is a very good friend of mine, so it was cool. Eventually, I had Igor and Philip Gruissem (both have won $9m each at poker) sitting next to me to socialize, so that was even more fun 🙂 I lost quickly which is fine, I was not here to win but to participate. That’s what charity event is for”, he said.

When you observe an event like this, it’s obvious how much fun the participating pros are having, often dishing out the banter and even helping out the recreationals around their table.  The pros also enjoy a more casual game with celebs and as Dreyfus mentioned, this year PokerStars brought Sean Astin along for the cause.

Poker Pro Liv Boeree said about Poker in Pink Monaco, “I played because I just love charity tourneys – they have such a uniquely jovial atmosphere; friendly competition without any of the seriousness of a normal tournament. I was seated next to actor Sean Astin who was great fun, apparently I reminded him of Karen Allen in Raiders of the Lost Ark, haha!”

As friendly and fun as these types of tournaments can be, it’s always exciting to find out who is crowned the winner.  This year the first prize was awarded to Sylvain Augelle, a gracious Angers, France native and someone who plays poker on the side rather than professionally.

“I was excited to register for this tournament, to play for a good cause, meet and discuss with celebrities and poker players…everybody was excited to play poker, novice and professional”, said Augelle.

“It’s the first live tournament that I have won.  I came to Monaco to play the FPS and this event, I finished ITM on FPS and I won a tournament, a charity tournament. In fact, I kept smiling all through the weekend”, he said.

What I love about interviewing winners of charity tournaments is hearing their story about why they love poker and what brought them to the event.  Augelle’s story did not disappoint and is both heartwarming and inspiring.

“It means for me a lot of things, I have played poker often for the past four years and three years ago I lost my big brother in a accident”, Augelle shared.  “He was an example for me and played poker too and I swore to him I’d win some live tournaments and maybe a big prize one day, so for me I succeeded on half of my promise. Now my objective is to finish the other part, in order to be peaceful”.

Augelle was clearly delighted with his accomplishment and Frost-Savio was also overwhelmed with the success of Poker for Pink Monaco 2015.

“We had the most amazing time that exceeded our wildest expectations! An extraordinary crowd of international poker stars, local players and even some A list celebrities converged to form an incredible 7 hour long tournament. PokerStars made this whole event by sponsoring everything, and we are so grateful to them! Thanks to them, we raised close to 11.000 euros!” she said.

As Frost-Savio mentioned, the fine folks at PokerStars, the company behind the EPT series, have been instrumental in the execution of Poker for Pink Monaco.  They are also proud to be a part of such a fantastic event.

“This is the second year we supported Pink Ribbon Monaco and this year we made the charity poker tournament a part of the EPT Grand Final Festival. It has always been important for us as a company to support different charity organisations and we are also giving our players a platform for giving money from poker back to charity. This goes both for online on PokerStars, but also across our live events. We appreciate the chance to work with Pink Ribbon and supporting the work for fighting women’s breast cancer in Monaco”, said EPT President Edgar Stuchly.

The positive experience everyone had this year at Poker for Pink Monaco has already inspired bigger and better ideas for next year, an event I personally have already put on my calendar for 2016.

Frost-Savio added, “We have been approached to start discussions and brainstorming, but I can only say that if this year is anything to go by, it will be incredible, an un-missable event for any poker player! Now we know what we can work with, next year will be off the charts!”