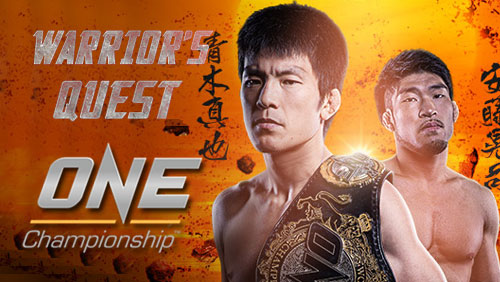 06 May 2015 – Singapore: ONE Championship™ (ONE) announced that Dejdamrong Sor Amnuaysirichoke will face Roy Doliguez for the right to be crowned the inaugural ONE Strawweight World Champion at ONE: WARRIOR’S QUEST which takes place 22 May at the Singapore Indoor Stadium. A bout between flyweights Stephen Langdown and A La Teng Hei Li has also been added to the card. Ariel Sexton replaces Rafael Nunes and will face Eddie Ng in a lightweight contest. Amir Khan and Shannon Wiratchai will push through with much awaited matchup.

Tickets for ONE: WARRIOR’S QUEST are on sale now at http://www.sportshub.com.sg/. Ticket categories begin with the full cageside experience at S$1,488. Tickets priced at $158, $58 and $38 are also available. Prices exclude ticketing fee.

CEO of ONE Championship™, Victor Cui, stated, “Dejdamrong Sor Amnuaysirichoke has been unstoppable inside the ONE Championship cage, but he now faces his toughest test to date when he takes on the Philippines’ Roy Doliguez. Singapore’s flyweight prospect, Stephen Langdown will also be back in action as he meets A La Teng Hei Li from China. Of course, our main event is not to be missed, as ONE Lightweight World Champion Shinya Aoki puts his title on the line against the number one contender, Koji Ando. Get ready for a night of jaw-dropping, world-class mixed martial arts action as ONE Championship goes live around the world.”

Dejdamrong Sor Amnuaysirichoke is a Muay Thai world champion who is currently undefeated in mixed martial arts. Amnuaysirichoke has received the highest accolades in Muay Thai, being a 3x Lumpinee champion, Thailand’s National Champion and the Omnoi Stadium Champion and holds an overall Muay Thai record of 282-65. Muay Thai, an ancient form of martial art originating from Thailand is coincidentally one of the most effective methods of hand-to-hand combat. The discipline is also one of the most widely used skill bases in modern mixed martial arts.

Known as a technical fighter with quick hands and lightning quick feet, Amnuaysirichoke has some of the most unique and creative striking combinations in the sport of Muay Thai. His transition to ONE Championship gave him an opportunity to potentially achieve as much success in mixed martial arts. He burst onto the scene last year and finished all four of his opponents convincingly. Amnuaysirichoke now drops a division to strawweight with the opportunity to be crowned the champion in the division.

Roy Doliguez is a Filipino mixed martial artist currently riding a 6-1 record. Considered one of the best strawweights in Asia, Doliguez solidified that standing by avenging the only loss of his career. Doliguez is also a professional boxer with more than 40 professional boxing bouts. This bout will feature two contrasting striking styles and it will be interesting to see who triumphs and walks away with the ONE Strawweight World Championship.

Stephen Langdown is a professional mixed martial artist from Singapore. One of the brightest prospects in the country, Langdown has proven his success inside the ONE Championship cage. On 22 May, he gets to showcase his skills once again in front of 12,000 fans in his hometown.

A La Teng Hei Li is a Chinese mixed martial artist. He hails from inner Mongolia and grew up wrestling. A veteran of the mixed martial arts scene in China, Hei Li now gets the opportunity to pit his skills against some of the best in the world in ONE Championship.

Eddie Ng is a Hong Kong lightweight who has dazzled in his multiple appearances in the ONE Championship cage. Ng has won four of his five bouts in ONE and returns to action after a one-year layoff determined to continue his ascent. A Brazilian Jiu-Jitsu purple belt, Ng has never gone to a decision in his professional mixed martial arts career thanks to his exciting style.

Ariel ‘Tarzan’ Sexton is a Gracie Jiu-Jitsu black belt with an impressive record of eight wins and three losses. He was born in Canada but now lives in Costa Rica. After discovering Jiu-Jitsu in 2001, he quit his day job and dedicated his life to mastering the art, before transitioning to mixed martial arts. His grappling acumen was on full display in his victories which he finished with a variety of submission moves.

Amir Khan is a Singaporean mixed martial artist with an undefeated amateur record who has competed in the United States. He is a Brazilian Jiu-Jitsu Blue Belt under Relson Gracie, and also has competitive wrestling and Muay Thai experience. With more than seven years of combat sports experience under his belt, Khan now takes on Shannon Wiratchai after being victorious all of his ONE Championship bouts so far.

Shannon Wiratchai is the top featherweight to emerge from Thailand. He has showcased an aggressive, brawling style every time he steps into the ONE Championship cage, making him a favourite among fans. Wiratchai is a practitioner of the Chinese martial art Baguazhang, and will once again look to exhibit the martial art in mixed martial arts action.