Lee Davy sits down with the latest member of PKR Team Pro, Dan O’Callaghan, to talk about his original plans for being the world’s tallest jockey, his love for doctors, and why he has a soft spot for Louis Theroux. 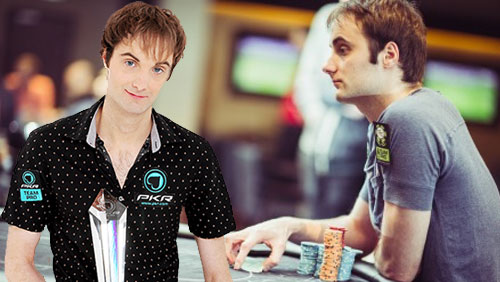 One minute you are sat at home, minding your own business, picking your nose playing online poker. The next minute you are signed up as a member of Team PKR Pro. You have to remove your finger and give it a wipe because the cameraman is on his way. Members of the media want to know who you are, and life changes in a big way.

That’s what’s currently happening in the life of Dan O’Callaghan, after being rewarded with a sponsorship deal with the online site he has called his home for many years: PKR.

“I’m 27-years old; pushing 30, which is scary. I live with my fiancée in a beautiful place called Wingate. It’s a great place. We have Channel 5. My fiancée is a doctor, so she can look after me if I ever go broke.”

I believe you write strategy articles? Perhaps you should write one on how poker players should marry successful people such as doctors?

“That sounds like a good idea. But if I did write it, my fiancée would probably start doubting my commitment.”

All joking aside, it must help, as a professional poker player, to have two separate streams of income?

“It does. Before she qualified as a doctor, she relied on my income when she was a student. I had a part time job in case we had a British Black Friday and I couldn’t grind anymore. It’s funny because I was doing some commentary at a Genting Poker Series. I bubbled the final table and they asked me how I was going to spend the money. I told them that my missus had already spent it in Ikea. She wasn’t happy.”

How did you start playing poker?

“It was when I was a student. We used to play in the kitchen over beers and curry. I was the bloke who never understood the word ‘check’.”

Checking is the most complicating part of the game to explain to people. It’s like the offside trap in football.

“I think they should call it ‘betting zero’. I was playing in a live game, once, and there was this bloke at the table who kept falling asleep drunk. In the end the casino had enough of him and the security guard came over and placed his hand on his shoulder. The drunk guy woke up and shouted ‘Check!’”

How did you find online poker?

“Victor Chandler Poker came to our University. They put on a tournament and everyone had a few quid to put on their online site. I never used it, but it was the first time I heard about online poker. The first site I ever played on was PKR, which is quite poetic now I have just signed for them.

“There used to be a channel on Sky that showed the PKR tournaments. I used to play in the events and hope I would get on TV. I never did. They used to also hold tournaments on PKR TV. That used to drive people to the site as well.”

“There is a great community spirit at PKR. It’s not just the online events. PKR Live is always a great time. They will put a chunk of money behind the bar, and qualifiers are well looked after. You feel drawn and attached to the site through those touches. You don’t get that treatment at a lot of the other sites unless you are a big star.”

It also gives you the opportunity to meet PKR players in the flesh.

“It’s funny, because they never look like the picture you have formulated on your mind. There is this guy I play online; a real beast; a real menace. He puts you in a tough spot all of the time. When I met him in person he was such a quiet guy. Nothing like his online personae.”

I remember learning that Muzowned was Will Dorey. It was incredible. I thought he was this big black gangster, and it turned out he was this quiet skinny white guy.

“He has such great table presence even though he is quiet. He doesn’t look particularly threatening, but there’s something about his table presence that makes you want to wee a little bit. He plays like a gangster…put it like that.”

How did the sponsorship deal come about?

“I won PKR Live, but I have also been on the site a long time. I have written strategy articles for them, I play at every live event and I am active on their forums. I was also second the time before I won PKR Live. There was a petition on the forum to make me a Team Pro. That was quite flattering.”

How are you finding life as a sponsored pro?

“People are trying to own me a lot more. There is a feature on PKR that turns my table blue when I sit down. It’s like having a constant bounty on my head. It’s the same when you are patched up live. Some people go out of their way to crush you. It works to my advantage. People assume I am not going to make a lot of mistakes, which I do.”

So you worked hard, got involved with your online poker site and got yourself noticed?

“I always wanted to be on the team. That was my dream. I have a degree in English and there’s not a lot you can do with an English degree. I didn’t want to be a young teacher. I wanted to write so I fell into strategy writing. There are benefits to it. It makes me think critically about things I wouldn’t normally think about. It helps me iron out leaks and concepts. I need to make sure I know my topic, inside out, before I commit to paper. It makes me study more.”

Were you always going to be a poker player?

“My parents always thought I was going to be a jockey. I was thrown on a horse before I could walk. I have trophies going back to 1995. I got signed up to a jockey program when I was five years old. I’m six foot three now. I would have been kneeing myself in the face.

“I lost interest in it. When I was growing up my friends were all chasing girls and playing football. I had to take care of the horses. It turned into more of a chore than fun.”

“An amazing guy. People watch their tricks on YouTube frame by frame these days. They kill the magic, and I love the magic. Look at someone like Derren Brown. That NLP stuff is amazing. That is magic in itself. If he was a member of the X-Men his ability would be to manipulate people’s minds. How cool is that.”