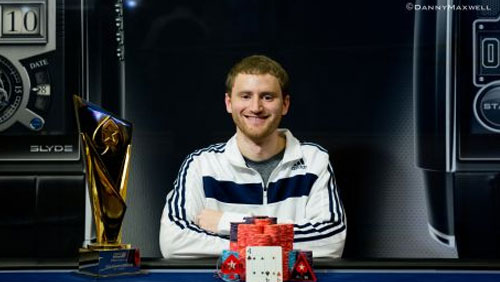 David Peters has won the €10,000 buy-in, European Poker Tour (EPT), High Roller Event, in Malta. The American defeated the Argentinian, Ivan Luca, in heads-up action, to take the €597,000 first prize. It was the biggest score of his live tournament career.

The pair did it the old fashioned way. Deal negotiations got underway after Peters found some river love to send the Russian Viacheslav Goryachev to the rail in third. The pair stood their ground. No deal was made, and they would play cards for a €200,000 pay jump.

It was tough, it was tense, and at times it was turbulent, but in the end experience won out over the heat.

I won with no chop for my biggest score ever! Thanks everyone for the support!

Peters is one of the American imports who have excelled on European soil. He has some decent scores on the EPT circuit, including a victory for $179,515 at the Eureka High Roller in Prague, back in Dec 2013. His latest victory takes him over the $5 million mark in live tournament earnings.

According to the PokerNews Live Reporting blog, the chip leader for long periods of the early final table scuffles was Nick Petrangelo. The Rhode Island native came into the final table in fine form; his fourth place finish in the €25,000 buy-in event, coming after two fine performances at the PokerStars Caribbean Adventure (PCA) secured him close to half a million dollars at the turn of the year. He was ranked third in the Global Poker Index (GPI) 2015 Player of the Year (POY) race behind Joe Kuether and Dzmitry Urbanovich, going into this one, but couldn’t close it out. The 28-year old had to settle for a sixth place berth.

It was another milestone in the career of the young British pro Charlie Carrel. The online grinder recently topped a tough UK field in the 2014 Grosvenor United Kingdom Poker Tour (GUKPT) Grand Final, for a $170,950 payday, and he beat that amount with an impressive fifth place finish for over $200,000. There will be plenty more to come from this young man in the near future.

Back to the winner.

Peters would take a 10.6m v 4.55m-chip advantage into the heads-up phase with Ivan Luca. PokerNews called it an ‘epic battle’. It ended after Luca moved all-in, from the button, holding ace-eight, and Peters called with pocket fours. Luca didn’t even get a sweat. A third four on the flop ensuring Peters would earn the plaudits. It was, however, another great run for Luca, who is fast becoming one of the most talented players in the world.