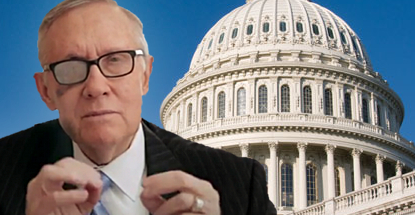 US Senate Minority Leader Harry Reid (D-NV) has announced he will not seek re-election in 2016, leaving gambling proponents mourning the loss of a key ally.

Reid, who first won election to the Senate in 1987, made the announcement in a video released early Friday morning. The 75-year-old Reid said his decision had “nothing to do” with the fall he suffered earlier this year in which he broke several ribs, facial bones and temporarily left him without the sight of his right eye. However, the downtime had given him the opportunity to reassess his situation and his conclusion was it’s time to hang up his spurs.

American Gaming Association CEO Geoff Freeman issued a statement calling Reid a “tireless supporter of gaming who solidified Nevada and the industry’s significance across the country.” Freeman said Reid had been “a visionary for what could be possible” and his “leadership and dedication will be missed.”

It remains to be seen what impact Reid’s decision will have on the likelihood of passage of the Restoration of America’s Wire Act (RAWA), the Sheldon Adelson-backed federal legislation that would ban most forms of online gambling except horseracing, fantasy sports and the types of closed-loop on-premise mobile gambling available in some US brick-and-mortar casinos.

Back in 2012, Reid had championed a federal online gambling ban with a poker carveout but that legislative effort failed to come up for a vote. This past December, Reid repeated his support for a federal ban and his willingness to push for a poker exemption but claimed he was “not for the Wire Act.”

It was unclear whether that statement meant Reid would support RAWA absent a poker carveout. His half-hearted statement that he would push for a poker exemption “if there was a chance” of getting it done suggests the issue is fairly low on Reid’s list of priorities.

There is one potential RAWA positive from Reid heading off into the sunset. Reid is claiming that it will be business as usual over his final 22 months on Capitol Hill but rank-and-file Democrats in the Senate will have less reason to fear his vengeance, should they choose to buck Reid’s desire to vote in favor of an online gambling ban.