Home / Sports / Weekly Poll: Who will win the NCAA Championship? 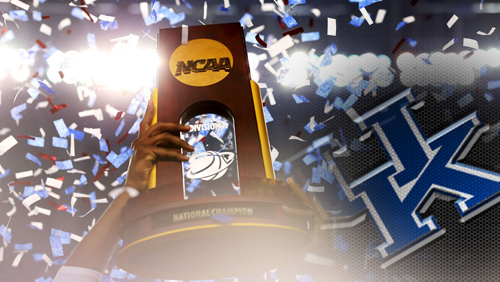 The NCAA mens’ basketball tournament will resume tomorrow with the Sweet 16, but before we dive back into March Madness, we polled our readers, “Who will win the NCAA Championshp?”

Naturally, the circumstances surrounding the University of Kentucky’s dominance throughout the season made the question moot if we had put other teams in the choices. So we pulled out the “Team vs The Field” prop from our hats and instead posed the question on who was going to win the tourney.

Would it be Kentucky, or would be it any-team-not-named-Kentucky?

Turns out, even with a choice between one team and everybody else, most voters still thought that the one team had a better shot to win the tournament. Once the votes were tallied, the results arrived with Kentucky getting 57.3% of all the votes while The Field received 42.7% of the votes.

Should Kentucky pull it off, it would also become just the eighth college basketball team to pull off the perfect season and the first to do it since the NCAA tournament field expanded to 64 teams in 1985. Talk about pressure.

Looking at Kentucky’s road to history, it’s first test comes in the form of 5 seed West Virginia. Should the Wildcats prevail, they’re looking at a match-up with either 3 seed Notre Dame or Wichita State in the Elite Eight, followed by a possible date with either fellow 1 seed Wisconsin, 2 seed Arizona, 4 seed North Carolina, or 6 seed Xavier in the Final Four.

In the event the Wildcats make it to the championship game, a potential date with the other 1 seed left standing, Duke, looms as a possible title game.

It’s still a tricky road by any stretch of the imagination, but if Kentucky can keep doing the same thing it’s done 36 times this season three more times, then they could etch their name in the history books as the first men’s college basketball team to go undefeated in a season in the last 39 years.

Next week, we ask, “How far will RAWA go?” as anti-online Restoration of America’s Wire Act (RAWA) had its hearing on Wednesday with the House Judiciary Subcommittee on Crime, Terrorism, Homeland Security, and Investigations. Join our weekly poll and check back next week for the result.