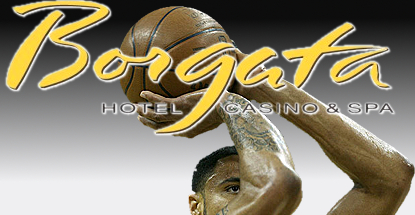 The son of a basketball coach has won the first non-poker skill-based tournament organized by a US casino.

Atlantic City’s Borgata Hotel Casino & Spa announced its basketball free-throw tournament last month in what Borgata Snr. VP Joe Lupo called a bid to engage “a little bit younger demographic.” By 9am on Saturday, there was a 50-deep lineup at the sign-in station. In the end, 1,022 people – mainly twenty- and thirty-somethings – anted up the $20 entry fee for a shot at a $10,220 payday.

But the day belonged to Al Callejas, a 37-year-old Pennsylvania resident who played NCAA Division III ball at the University of Scranton. New Jersey native Wayne Nelson earned $6,132 for placing second, despite an unorthodox style that involved banking in every shot off the backboard. The Press of Atlantic City quoted Nelson justifying this technique by saying: “It’s a casino. The bank is always open.”

The Borgata won’t truly know if the event was a success until data from the contestants’ Borgata Rewards cards indicates how many stayed on to eat, drink and gamble at the casino. Regardless, Lupo said the Borgata will “100%” host similar skill-based contests in future. Lupo told the Inquirer that future contests could involve electronic games similar to Angry Birds, X-Box titles or even the venerable old arcade game Asteroids.

BORGATA SUES TO BLOCK AC’S BORROWING PLANS
In less positive news, Friday saw the Borgata sue Atlantic City over its plans to borrow $43m on the bond market. The city needs to repay a state loan that comes due March 31 but the Borgata says AC is violating a September ordinance that allows the city to borrow up to $140m to pay property tax refunds. The Borgata is owed a refund of over $88m and it doesn’t want the city borrowing to pay off other bills before the property tax issue is resolved.

Borgata president Tom Ballance issued a statement calling the casino “a significant creditor of the City of Atlantic City” that was “pursuing this litigation solely to protect and preserve our rights.” Boyd Gaming, which shares ownership of the Borgata with MGM Resorts, says the Borgata’s entire capital budget for 2015 is only $40m, making the tax refund crucial to the company’s plans.

The lawsuit was filed just days before AC’s emergency manager is scheduled to issue a report on ways to stabilize the city’s troubled financial picture. Ballance said the Borgata would have preferred to work things out with the city and the emergency manager but the latter told them “he is not prepared to discuss the city’s plans with us until his report is filed” on Monday.