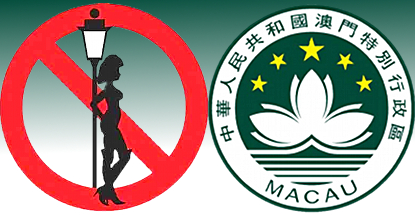 Macau police have broken up a major prostitution ring, the second such high-profile bust since the year started.

On Wednesday, Macau officials announced the arrests of 42 individuals, including one alleged ‘kingpin’ who was just 17 years old. The suspects include 36 alleged gang members, three relatives of gang members and three prostitutes. The suspects are all from the Chinese mainland. Prostitution is legal in Macau but pimping carries a potential jail term of up to eight years.

The ring’s kingpins operated out of four rooms in a hotel on Cotai, although police have yet to identify the name of the property. Police said the ring used social network accounts to attract clients.

The working girls would meet clients at hotels of the clients’ choosing. Clients would pay between MOP 1k-3k (US $$125-$375), of which the girls would keep 50%, although they weren’t paid until they returned to the mainland. The gang member who found the client would get 30% and the remaining 20% went to the kingpins.

In January, police broke up an even larger prostitution ring operating out of the Hotel Lisboa. Among those arrested was Alan Ho, nephew of SJM Holdings founder Stanley Ho. While the hotel wasn’t under SJM’s direct control, managing director Angela Leong On Kei subsequently vowed that SJM would “reassess our security and senior management employees and how to do better in terms of accountability.”

The Hotel Lisboa bust was followed almost immediately by news that South Korean law enforcement had broken up the first Macau-based sex-trafficking case involving Korean nationals. The Korean Times reported that a 30-year-old man identified only as Yoo had operated a prostitution service in Macau from April to November 2014. Ten Korean women had been enlisted for the operation, which catered to Chinese men’s reported preference for Korean girls. This preference allowed Yoo to charge higher rates, ranging from MOP 6,300 to 15,500 per session.

Bottom line: we’re pretty sure this isn’t what China’s Presient Xi Jinping had in mind when he insisted that Macau diversify its economy beyond gambling.