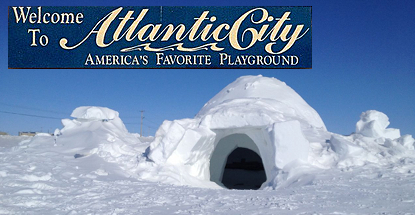 Atlantic City casinos took a step back in February, as the eight remaining operators saw gaming revenue decline 2% to $168m.

While the decline can be chalked up to a prolonged spate of frigid temperatures across the US northeast, it comes as a disappointment following January’s nearly 18% year-on-year gain. The decline would have been nearly 15% if contributions from the four casinos that closed last year were included. The $168m figure doesn’t include the $10.4m the state’s regulated online gambling market earned in February.

A poll conducted last month by Rutgers-Eagleton found that a majority of New Jersey adult residents believe Atlantic City’s best days are behind it. Nearly two-thirds (63%) of those polled felt AC’s best days have left the building, while 25% said the best was yet to come and 12% were on the fence.

Just 38% of respondents said they’d actually visited the seaside resort town in the past 12 months, down from 43% in a similar poll last October. The South Jersey Transportation Authority said AC greeted 25.4m visitors last year, down 5% from 2013 and down 27% from 2005. The disinterest may have something to do with the city’s hotels boosting their room rates by 10% in 2014, according to Hotels.com’s Hotel Price Index. Despite the hike, AC’s occupancy rate rose one point to 92% last year.