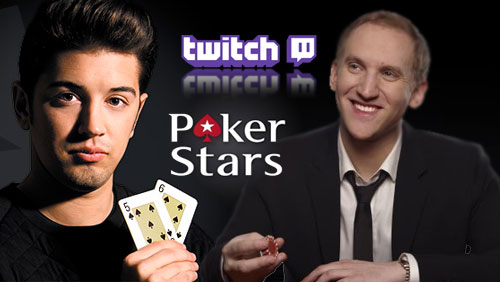 PokerStars have announced the signing of Jason Somerville, and the forthcoming launch of the official PokerStars Twitch channel, and Spain’s Vicente Delgado decides against renewing his sponsorship deal with the same company.

“Let’s be honest: who expected Jason Somerville to make Team Pro in 2015?”

The words of PokerStars scribe Brad Willis after revealing that Jason Somerville was joining the world’s largest online poker room as a member of Team Pro.

A lot of people expected Jason Somerville to sign for PokerStars.

Online poker rooms have been dropping sponsored pros like Frank Gallagher drops E’s. I’ve agreed with them. There’s no purpose in keeping, what is essentially a cost, if it doesn’t provide value.

There was a time when a sponsored poker player slapped on a patch, turned up, and played poker. The lips would move outward for the occasional photo. They would hold a microphone and try very hard not to be their authentic self.

Those times have changed.

That’s why the online poker rooms are letting sponsored player’s leave in their droves. They are not innovating. They are not evolving. Most of them aren’t even trying.

The world’s leading video game platform, Twitch, won the Innovation of the Year award at the recent Global Poker Index American Poker Awards. Everyone is twitching because of Jason Somerville.

The 27-year old had vision. He took action. He told stories; he created a soap opera; and he did it all whilst playing online poker. He turned a serious sport into a video game. It worked. He became one of the most influential poker players in the business.

Starting on March 1, the newest member of Team Pro will play on PokerStars for 70 consecutive days. He will record his journey live on Twitch. He will play an average of four hours per day. That equates to 16,000 minutes of poker content.

Vicente Delgado Goes in the Opposite Direction

Talking to Brad Willis, Jason Somerville said: ‘a partnership with PokerStars is like the holy grail.’

Delgado first came to the attention of the world’s largest online poker room when he became the first player to reach Supernova Elite status on the Spanish facing PokerStars site.

PokerStars signed him up to represent Team Online Spain. He repaid that faith by winning the World Championships of Online Poker (WCOOP) High Roller event for $637,436, but as I alluded to earlier, results are not necessarily in the roles and responsibility statements for Team Pros.

He started the year well. A 19th place finish in the $25,000 PokerStars Caribbean Adventure (PCA) High Roller, netting him $69,720, for his largest live score to date. But now he is on his own. His contract has been torn to shreds, and it seems the Spaniard was the first to make a tear.

“Today I am saying goodbye to PokerStars as I decided not to renew my sponsorship contract for 2015,” Delgado told Poker Red. “The truth is that had I great expectations for growth in the Team Pro, and those expectations have not been met. I realize that marketing in this sector has changed significantly compared to previous years, and Team Pros no longer carry the same importance as before. Being on PokerStars entailed many responsibilities and hours of work that prevented me from fulfilling other objectives that I had in mind.”