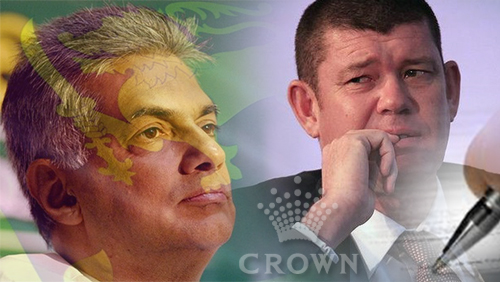 Sri Lankan Prime Minister Ranil Wickremesinghe is vouching for his government’s decision to withdraw its license approval and tax breaks for Crown Resorts’ proposed $450 million project in Colombo, essentially saying that the country really wasn’t going to make anything out of the deal with the Australian casino titan.

Wickremesinghe hinted that the only reason Crown received a casino license was because the previous administration, led by former president Mahinda Rajapaksa, gave it to Crown boss James Packer as a political favor. But Packer’s hopes of putting up the resort in the South Asian country were derailed when Rajapaksa lost the election. With the new administration promising to withdraw the casino licenses as part of its campaign platform, it became clear that Crown’s presence in Sri Lanka was on borrowed time.

“We were the only country in the world where casino revenue wasn’t taxed. It became an issue for us also because all religious leaders opposed it,” Wickremesinghe told The Australian. “[Packer] decided to go ahead despite wide opposition because he felt his friendship with the Rajapaksa regime was sufficient and the Rajapaksa regime would be there forever. So you played politics, that’s all. There’s nothing to complain about.”

Wickremesinghe didn’t use the word ‘corrupt’ in describing Packer’s business dealings with the previous government, but he did lament the lack of transparency in the casino bidding process and the perceived crony capitalism that was allegedly running amok in the previous administration. “There will be inquiries into some of these business companies associated with corruption. In a truly capitalist system there can’t be corruption. There has to be genuine competition,” he said.

And despite basically shuttling Packer out the door, Wickremesinghe maintained that foreign companies, including Australian investors, are more than welcome to go do business in Sri Lanka, highlighting that his administration would make sure that it would have an “open and transparent investment climate.”

“We are putting a new investment regime in place. We want to encourage direct foreign investment in the real economy, in manufacturing, agriculture and the services sectors,” Wickremesinghe added.