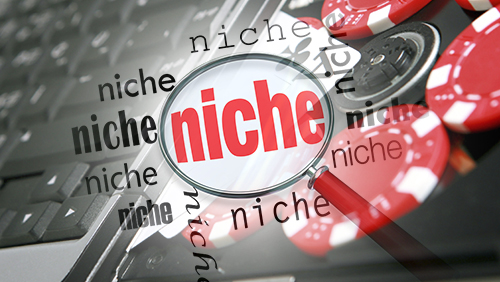 The term ‘niche market(ing)’ is extremely overused in online gaming.  I find that ‘niche’ is a pretty term to jump behind when struggling to explain this industry to others. In poker specifically, I can think of every conceivable niche being attempted. The copycat – innovation – abject failure cycle has been fast and furious in poker. Seriously, what didn’t the industry try?

Let us not forget that:

The online gaming industry is worth billions of dollars. It is not going anywhere and is growing. Based on this gaming growth chart, the outlook is pretty good. I wanted a second source, so this business insider article confirms that the gaming industry in the USA is worth 240bn.

For perspective, the National Hockey League (NHL) is about to set a record with 3.7bn in revenue.

As poker is a relatively new industry which went on a surge over a short time, every Tom, Dick and Harry has tried something. Every niche possible has been explored. More fails than wins, that’s for sure. Everything has been tried from blackjack poker stud while riding a surfboard (ok that’s an exaggeration) to some terrible reality shows. Yet new successful ideas still are popping up.

Choosing a niche and driving it home is fun and will provide stability if it is successful. Another fascinating example of a niche which is relatively new, only a few years old, is cryptocurrency gaming. I am guessing the big operators like ‘Stars did a feasibility study (probably 12 studies) and has determined that it is not viable. There are dozens of site owners that certainly disagree. Word on the street is that margins are still too low to justify much, but I would keep an eye on this niche in the future.

Try to Create your Own Niche

First thing is first, you must justify your unique value/selling proposition. Do some analysis and make sure that your product is wanted by the market.

Once you are confident in your idea, spend some time on metrics branding. That is, decide how to measure the project and decide a consistency in how you will brand it.

Then it is time to enter the fray. Decide that now is time to stop trying to be your competitors, a very fun phenomenon will occur. You will suddenly be in your own lane. Racing with yourself, while others try to figure out what you have done. Eventually people will try to replicate you, but for now, you are the pioneer. The master of your own destiny. Competition becomes obsolete while you go gangbusters.

A great example in the industry of a gaming company finding their niche and going gangbusters recently is Playtika the social gaming company owned by Caesars Interactive. These guys carved out a niche, specifically, online slots for Facebook, and they have been absolutely crushing it ever since.

Another niche is the World Series of Poker. Another Caesars production.  This is the tournament series of all tournament series’ that draws all the money in poker to Las Vegas for a couple of months. It culminates into the ‘World Championship’ of poker. No other company can ever even come close to replicating this niche. The WSOP has spawned many niche companies around it, creating its own economy and workforce.

PokerStrategy is another great niche at work. It is an online tech driven lead generation behemoth with a core element of community wisdom and camaraderie wedged in. Niche marketing on an entertainment subject (poker) with great results.

I started thinking about gender specific niche. I googled ‘pink casino’ and sure enough, there is the ‘UK’s Leading Ladies Online Casino’ as the top result. I searched ‘camouflage casino’ thinking about men, and was surprised to see no result. I checked out many more men’s related terms and found nothing. I suppose men are assumed to be the ones gambling. It’s a bit weird to think woman are being specifically marketed at whereas men are not.

There are many great niche’s out there to learn from. There are also a couple golden tickets waiting to be found in online poker marketing.

Creating a Niche is Not Easy – Don’t Give Up

In closing, a quick reminder:

If it was easy, everyone would be trying to do it and succeeding. As mentioned, in poker, everybody has tried almost everything. If you want a laugh, check out this eBay link. There sure is lots of poker kitsch out there.

If you are building on something existing, maybe look into new markets. If you are a true innovator, don’t be scared to get creative. Find some niche’s to try out and give it a shot.

In the words of the great Wayne Gretzky: “You miss 100% of the shots you don’t take.”
Robbie is on Linkdin and twitter.