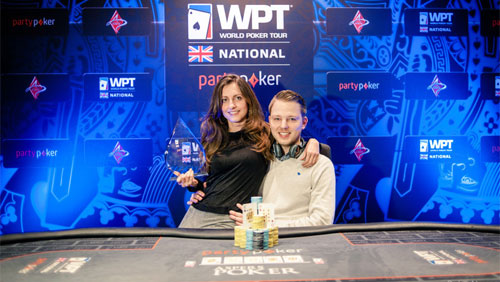 The event took place at Aspers Casino in Stratford. It was a £200 buy-in event with accumulator rules. This allowed players to buy-in three times and take their combined weight of chips into the second day of action.

The partypoker sponsored event attracted the UK pros with most of the laughing gas. Steve Watts, Sinem Melin and James Dempsey enjoying the fun, but not bearing any fruit. There was even a return to action for the former Poker Million winner James Akenhead. None of the aforementioned stars of the game made a dent in this one though.

Chris Gordon was the most experienced player at the final table. He sat down with close to $200,000 in live tournament earnings. He left with over $200,000. It was his biggest score to date. He is yet to hit the jackpot. Instead, he has kept in the game by cashing consistently since 2007.

Darren Mapley deserves a hat tip. The last time he was playing in a partypoker sponsored WPT National Accumulator event, he won it. That was in Newcastle, in May, when he beat Mark Gray in heads-up action to take the £17,500 first prize. He would pick up £7,480 for a fourth place finish in this one.

594 entrants created a total prizepool of £106,920. By the time we had whittled that number down to two, it was Gordon holding a 4:1 chip lead over the Spaniard. There was stubborn resistance. There was one double up. But Garcia never got any true momentum. He crumbled after an hour. It wasn’t a pretty ending.

But then what ending is?

Garcia getting it in with pocket tens against [Kc] [9d]. The first card to hit the flop was a ten. The Spaniard’s rail exploded. Then the board ran out to river a straight for Gordon, and the fire was extinguished before it had even gotten any air.

When the WPT National series returns it will be in the Belgian capital of Brussels for the €750 buy-in WPT National Brussels Feb 19-22.