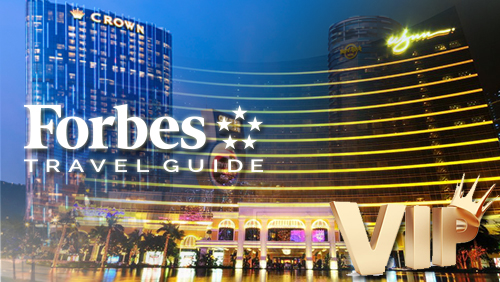 may have experienced a decline in net revenue in the fourth quarter of 2014 but at least it received some good news after two of its properties, Altira Macau and Crown Towers, became the recipients of the Forbes Travel Guide Five-Star Awards.

The two properties have become regular winners of the prestigious distinction, bringing up Melco Crown’s tally to eight awards in the last few years.

“We are very proud to receive these accolades from Forbes Travel Guide. I am especially delighted that our efforts to achieve the highest standards in service continue to be recognized internationally,” Melco Crown Entertainment CEO Lawrence Ho said in a statement.

All in all, eight hotels in Macau were given the distinction. The other six are the Banyan Tree Macau, Encore Macau, Four Seasons Hotel, Mandarin Oriental, and Wynn Macau. Altira and Crown Towers were among the nine restaurants that were awarded the Five-Star award. Of the 14 restaurants that were either given Five-Star or Four-Star awards, there were two restaurants from Altira – Aurora, Tenmasa – with Crown Towers boasting another two quality eating spaces – Jade Dragon and the Tasting Room.

Meanwhile, the SunCity Group, regarded by many as the biggest and most powerful junket operator in Macau, is expected to open its VIP room in Wynn Macau. According to Union Gaming Research Macau Ltd., the junket operator could open its own room as early as this weekend.

Wynn Macau President Gamal Aziz said that the company has already axed weaker junket operators, opting only to deal with the strongest junket operators, at least from a financial standpoint. “We’ve given our two new rooms to Guangdong and to Suncity,” Aziz added. “Suncity is financially probably the most powerful of the junket operators.”

Union Gaming Research Macau indicated that SunCity’s inclusion in Wynn Macau’s VIP gaming area allows the operator to resume the use of some 40 odd gambling tables that were offline for the better part of last year as the company revamped its VIP space.