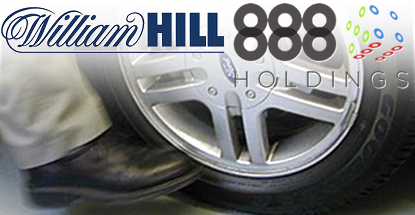 Following initial reports, 888 issued a statement saying it had “received an approach regarding a possible offer,” but added that there was no guarantee that “any firm offer will be made nor as to the terms on which any firm offer might be forthcoming.” The company promised to update the market within 28 days.

This isn’t the first time 888 has been the subject of acquisition talk and this deal may also amount to nothing in the end. The Times claimed that the Shaked family, who played a key role in 888’s origin story and holds nearly half of 888’s shares, is insisting on a 300p per share offer or no dice.

Hills has yet to issue any statement regarding the deal but Panmure Gordon analyst Karl Burns suggested Hills was unlikely to up its offer. Burns suggested meeting the alleged Shaked price target would “stretch [Hills’] balance sheet to a degree that they may have to raise capital as well.”

On the surface, the deal would appear a good fit for Hills. 888 is one of the few listed operators whose poker vertical has weathered the global decline in poker revenue. 888 also has a foothold in America’s regulated online gambling markets, with operations already active in New Jersey and a Nevada launch expected sometime this year. Hills has a solid presence in Nevada sports betting and has a tentative betting deal with New Jersey’s Monmouth Park.

Hills’ play for 888 reflects the squeeze facing all UK-facing online gambling operators, which are struggling to absorb the impact of the new 15% point of consumption tas. Retail operators like Hills will also face a hike in Machine Games Duty on their fixed-odds betting terminals come March 1.

Where Tuesday’s news leaves UK-listed operator Bwin.party is anyone’s guess. Speculation continues to swirl that Bwin.party is a takeover target but so far it’s been all smoke and no fire. Poker writer Dave Behr (@dave_behr) underscored this sentiment with this Tuesday tweet: “I picture bwin, sitting on stage, checking their phones, waiting for their number to be called, as all other chairs empty out.”