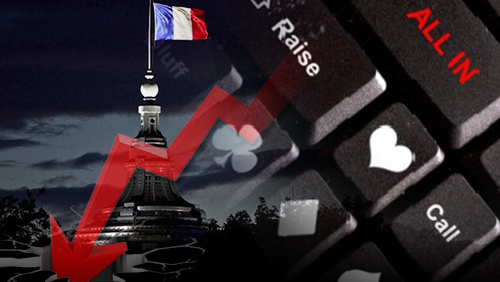 French online poker cash game traffic has dropped 33%, over the past three years, according to a fresh report from the French independent online gaming regulator ARJEL.

If you want to see a lot of art, queue for a exceedingly long time to climb to the top of a very large tower, or visit a cathedral that was once the home to a geezer with a colander tucked under the back of his shirt then go to France.

If you want to play poker, then don’t.

That’s not the view of a xenophobic Englishman chucking stones from across the channel. That’s the view of over a hundred French poker players who now earn their trade playing out of a different country.

And how does that effect the French online poker economy? It affects it quite a lot, actually.

It was painful reading.

My thanks go to PokerNews for the translation that tells a story of a €17.3m decline in the country’s online poker revenues, when compared to the previous quarter.

I reached out to a smattering of French online gaming stalwarts and this is what they had to say.

“Online poker rooms are not advertising in the global media outlets like they used to.” Says PokerNews France Chief Editor, Matthieu Sustrac. “The only form of advertising that seems to reach the public involves tournament play. This is why you have seen a big decrease in cash game action, and an increase in tournaments.”

PokerStars Team Pro, Bertrand ‘ElkY’ Grospellier, agrees with the sentiment that tournament poker seems to be the preferred route for the French: “I think poker is still healthy in France as shown by the great showing at the French Poker Series (FPS) in Deauville. It was another record-breaking year. Also online tournaments continue to do well with frequent million euro prize pool tournaments even after the UK withdrew.”

With more players heading to the glory of tournament poker, there is bound to be a reduction in cash game numbers. But a €17.3m decline quarter-on-quarter? There must be something else going on.

“Winamax and PokerStars are pushing their lottery style S&G products like Spin & Go and Expresso.” Said the Global Poker Index (GPI) CEO Alex Dreyfus. “This is where the profits lie for the online operators, and why you will see a reduction in ring game traffic.”

PokerStrategy journalist Antoine Lafond concurs: “When a new player sits down at a cash game table he or she is greeted by a table of good players. Beginners have fewer opportunities to progress. Their shelf life is not that long. However, when they play tournaments they can stay in the game longer. It seems like they are getting more value for money. They also love the Expresso and Spin & Go format. It’s more fun and they retain hope that they can win bigger prize pools in a shorter space of time.”

Taxation also plays a part with a high volume of players leaving the country.

“Regulars who used to beat the game are now living outside of the country.” Said Sustrac, “If you consider 150 them are now playing abroad, and factor in the thousands of hands they would have played, you start to understand the financial difference this can make.”

“For me the starting point of this fall lies with the disproportionate taxation that’s applied to online poker operators.” Says Lafond.” The high taxation leads to different choices. Marketing is directed at promotions that can bring in more revenue, and VIP programs are adjusted to recompense some of the losses.”