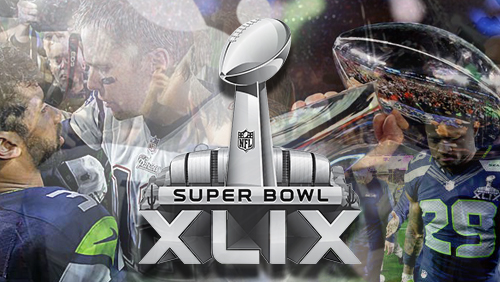 If you still need to catch your breath after what is without question the most dramatic Super Bowl finish in history, I can’t blame you. I’m still at a loss for words myself, having just been part of a dramatic sequence of events in the closing stages of the game that will be talked about for years to come.

A lot of you saw it the same way I did. A go-ahead touchdown with a little over two minutes left put the New England Patriots ahead of the Seattle Seahawks, 28-24. The defending champs had one last drive to answer the bell and up until the last play – I’ll get to that later – Russell Wilson and the Seahawks offense put on a thrilling comeback attempt, highlighted by a seemingly inconceivable twisting-on-his-back catch by Jevon Kearse. Words really can’t do justice to the catch; it was that incredible.

With the Seahawks on the Patriots goal line, underrated Patriots cornerback Malcolm Butler managed to overshadow Kearse’s acrobatic catch with a fantastic interception to clinch the win for the Pats. Incredible.

The entire game was a nip-and-tuck affair that featured the Patriots going up by 7 late in the second quarter before the Seahawks answered with 17 straight points to go up by 10 in the fourth quarter. Just when it seemed like Seattle was on its way to win its second Super Bowl title in a row, Tom Brady and the Patriots came to life just in time to post 14 straight points of their own to go up 28-24, setting up the amazing sequence of events that will define the greatest Super Bowl ever played.

Say what you will about Tom Brady, but he proved for the last time that he belongs in a completely different discussion in the pantheon of greatest quarterbacks to have ever played this game. With this win, he not only won his fourth Super Bowl title to put him even with Joe Montana and Terry Bradshaw, but he did so while also setting numerous Super Bowl records. Tom Brady is the GOAT, ladies and gentlemen. There’s no denying that now.

On the flip side, what the hell happened on that last play, Pete Carroll? 2nd down on the New England two-yard line with two timeouts left and you call an inside slant when you had Marshawn Lynch in the backfield? I’ve never been the type to question a football coach’s acumen, but I’m making an exception this time.

What the hell, Pete Carroll?! This one, sir, you’ll have to live down for the rest of your coaching career, maybe even your whole life if you don’t lead the Seahawks to another Super Bowl title.

That’s the price you pay for making one of the most questionable coaching decisions I’ve ever seen. You had Marshawn Lynch! You know, the guy we all affectionately call “Beast Mode”! Give him the ball and see if he can punch it in. If he can’t, call a timeout and then do it again! If he can’t another time, call your last time out and then switch things up a little. You had so many options at your disposal and you ended up taking the riskiest move with the least amount of reward.

Give credit to Butler, too, for making an incredible read of the play and cutting off Doug Baldwin as he was hauling in the pass from Wilson. The fact that an undrafted free agent who has been ignored more times than I care to count made that play is a testament to the kid’s talents.

I know Brady won MVP, but couldn’t he have at least shared it with Butler? For my money, the young buck literally won that game for New England. Ergo, MVP.

If you bet on the Pats (like me!), congratulations! It looked dicey for a while, but they somehow pulled it off. But if you’re a Seahawks fan, this one is an incredibly bitter pill to swallow. It’s arguably the most painful way to lose a Super Bowl that doesn’t involve getting stripped on a kneel down and the other team taking it to the house to win by 1.

But damn…two yards…two timeouts…Beast Mode. Everything was set up for Lynch to punch it home and give Seattle its second Super Bowl ring. Too bad Pete Carroll got in the way of his own team’s success.