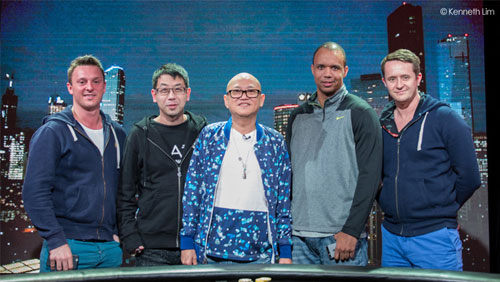 How many players can brag that they had Phil Ivey and Sam Trickett in their winner’s photo?

The Malaysian businessman defeated a stellar field of 70-entrants to capture the first prize of AU$1,870,000 in the Aussie Millions $100,000 Challenge at the Crown Casino in Melbourne.

It was a sweet victory.

Not only was it the first of Yong’s poker playing career, but it ended a nightmare 12-months where he pleaded guilty to a misdemeanor charge of ‘accessory after the fact to transmission of wagering information,’ for his role in the Caesars Palace World Cup illegal sports betting ring that has seen fellow high stakes player Paul Phua also make the headlines.

Yong was fined $100,000, ordered to forfeit $400,000 in cash and property, and banned from the U.S for five years of unsupervised probation for his part in the scandal. So he nipped down to Australia to take on the worlds best instead.

The German superstar entered the final table as the chip leader, and if anyone was the favorite to take the title it was him. The current Global Poker Index (GPI) world number one has earned $6.7m in the past four years, but precious little of that has been taken from these lands. He was determined to change all of that. Yong had other ideas.

Yong eliminated Scott Seiver in third place after sevens crashed and burned against jacks. That set up a heads-up clash with the whale versus poacher. It was 4.9m in chips for Yong, 2m for Schemion, and despite the bearded German having won 11 of his 16 heads-up clashes, he could not make it number 12.

It was the first win of Yong’s career, and he now has approx. $5.8m in live tournament earnings.