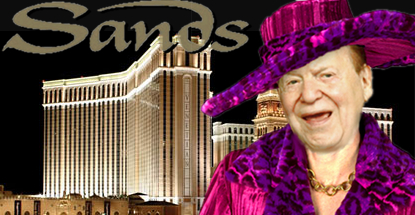 Macau’s dearth of VIP gamblers was evident in rolling chip volume, which was down nearly 40% at the Venetian, -52.3% at Sands Cotai Central, -36.3% at the Four Seasons and -43% at Sands Macao.

At Marina Bay Sands in Singapore, revenue rose 27.1% to $838.6m and occupancy rates rose 1.4 points to 98.3%, prompting LVS chairman Sheldon Adelson to paraphrase Mark Twain by saying rumors of Singapore’s demise as an integrated resort destination had been greatly exaggerated. Gaming revenue at MBS increased by one-third thanks to VIP win rate nearly doubling year-on-year to 3.58%, which helped offset a 26.8% fall in VIP gambling turnover and a 3.3% decline in mass table drop.

ADELSON REMAINS BULLISH ON MACAU
Adelson refused to get pessimistic about Macau’s revenue decline, noting that Sands China, with its mass market strengths – market-leading number of hotel rooms, non-gaming amenities, retail malls and meetings and conference space – was better equipped than its competitors to ride out the VIP slowdown.

Mass market tables/slots and non-gaming accounted for 84% of Sands China’s 2014 profit, up from 82% in 2013. Adelson noted that Sands China earns more revenue from non-gaming amenities than the other five Macau casino concessionaires combined.

Sands quoted figures showing mainland China visitation to Macau was up across all provinces in 2014, yet no province – even neighboring Guangdong – had yet to reach penetration rates over 9%. The strongest growth was realized in provinces served by high-speed rail and Adelson believes that more mass market gamers will flock to Macau as mainland infrastructure improves.

Adelson took time out to praise exiting Sands China CEO Edward Tracy for his service over the past few years. Adelson, who has assumed the role of Sands China’s interim CEO, joked with analysts that he “hadn’t done too bad the last few years” and that if he continued to do well he was “going to go to the board and ask for a raise.”

Adelson also rejected concerns about LVS’ stock price falling as a result of Macau’s woes. Adelson said he had 432m shares of LVS, hadn’t sold a single share since 2006 and didn’t intend to start selling now. Adelson remains bullish on Sands’ further expansion into emerging markets because no other company “can present the bona fides that we can do.”