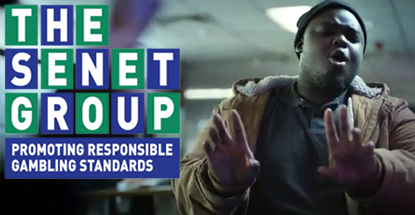 UK bookmakers have launched a new £2m responsible gambling campaign intended to remind punters to curb their impulses when gambling stops being enjoyable. The Senet Group, whose ranks include Coral, Ladbrokes, Paddy Power and William Hill, have debuted a pair of new TV adverts centered around the message that: “when the fun stops, stop.”

The TV spots (viewable below) follow a print and online campaign that launched earlier this month and were created by marketing firm The Corner. The ads – one targeting users of fixed-odds betting terminals (FOBT) and the other targeting sports bettors – both involve a take on Ram Jam’s legendary 1977 rendition of Leadbelly’s blues standard Black Betty. In each spot, a losing gambler is shown throwing a bit of a tantrum, after which everyone else breaks into song, warning the punter of the dangers of ‘Bad Betty’ behavior.

The Senet Group was formed in the wake of relentless efforts by some of the UK’s more hysterical media outlets to paint FOBT as mechanical manifestations of the Antichrist. At the same time, local councils were becoming increasingly antagonistic towards the opening of new betting shops. Figuring they’d best act before government imposed even stricter controls, the bookies agreed to rid their shops of FOBT marketing, to dedicate a portion of shop windows to responsible gambling messages and to launch the new TV campaign.

Former Civil Service Commissioner Wanda Goldwag has been named the Senet Group’s chair and independent standards commissioner. Speaking at the campaign’s launch this week, Goldwag said she’d soon be paying a visit to Gibraltar in the hopes of encouraging additional online betting operators to join the Group’s founding four members.

CRACKS EMERGE IN UK COALITION OVER GAMBLING ADS
Meanwhile, delays in publishing the UK government’s review of gambling ads are causing rifts in the ruling coalition. In a letter leaked to the Daily Mail, Liberal Democrat MP and Treasury Chief Secretary Danny Alexander urged the Department for Culture, Media and Sport (DCMS) to get a move on because betting ads were taking over television.

Alexander said it had “become almost impossible to watch any kind of sports event without being bombarded by highly solicitous advertising.” Alexander scorned the “grubby deal cooked up by the last Labour government” that permitted gambling ads to run in sporting events before the 9pm ‘watershed.’ Alexander has yet to weigh in on the appropriateness of the Senet Group’s ‘Bad Betty’ ads, which will also run alongside major sporting events.

In response to Alexander’s missive, a DCMS spokesman said the advertising review would be published “shortly” and that the government was “completely committed to ensuring that player protection is at the heart of gambling policy.”