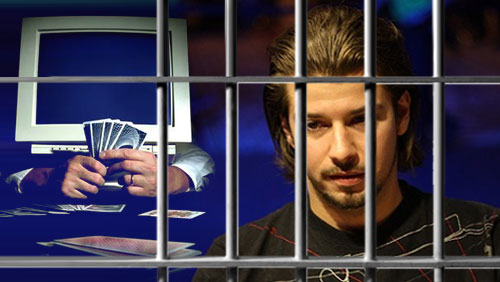 Former World Series of Poker bracelet winner Darren Woods has been sentenced to 15-months behind bars for his online poker crimes.

A former World Series of Poker (WSOP) bracelet winner has been sentenced to 15-months behind bars, and ordered to pay back £1 million to the organizations, and players, that he duped during his crimes, after being found guilty of fraud by representation, in connection to online poker scams, at Sheffield Crown Court last week.

Darren Woods, 29, pleaded guilty to nine counts of fraud by false representation, after originally being charged, and maintaining his innocence, on 13 separate charges, and although 15-months is nowhere near the maximum sentence of 10-years, it’s still a victory for online poker.

The investigation into Woods behavior started in late 2011, when the Humberside Police’s Economic Crime Unit slapped a restraint order on him, and froze all of his assets. Woods, a one time 888Poker sponsored player, and Limit Hold’em coach on PokerStrategy, was in hot water after allegedly multi-accounting and creating bogus accounts to profit from affiliate payments.

Judge Paul Watson QC also ordered Woods to pay back £1m to those he had wronged, or else expect his jail sentence to be extended by a further six-years. Reports in the Grimsby Telegraph state £911,217 had been restrained, and Woods was ordered to pay £287,673 in compensation to an unnamed Gibraltar based gaming company, which would be used to pay back players that Woods had defrauded on their site. Police believe Woods made far more than the one million he is being asked to return.

Prosecutor Andrew West told the court: “At the moment, he has assets well in excess of £1.4 million.”

There is nothing, in either court reports of the Grimsby Telegraph reports that show any remorse coming from Woods, and the latter even ran with the headline: “Jailed Healing Poker Millionaire Darren Woods Insists: I’m Not the Criminal, I’m the Victim.”

Judge Watson told Woods: “You are an intelligent, able and even gifted young man but you turned your talents towards defrauding online gambling companies and cheating other players of online poker.”

He proceeded to chastise him and suggested that cheats like Woods affected the online gambling industry with people being ‘deterred if the system is unfairly balanced in favor of other players.”

The online poker players who were robbed by Woods may well be thinking: “When are we going to get our money back?”

Gordon Stables, who was representing Woods, had some good news for them: “All of those who feel they have lost out will be compensated, every last one,” said Stables before continuing to describe how his client’s name had been ‘effectively destroyed within the poker world’, and how, ‘he will not, in future, receive the sponsorship he once benefited from,’ and lastly, how his means of earning a living had been denied to him.

Woods father, Morteza Gharoon, was also sentenced. The 56-year old admitted possessing cannabis that was found at his home during the initial search, and admitted money-laundering charges. He was given a six-month suspended prison sentence, with no conditions, and had £18,910 confiscated from his accounts.