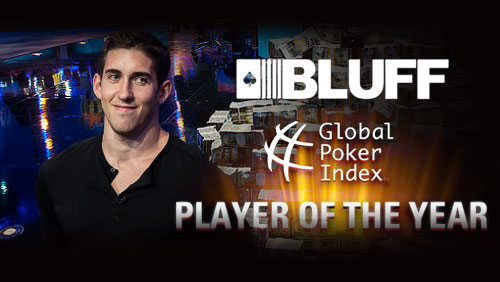 Daniel Colman rubber-stamps his superiority over the rest of the poker world after ending the year in first position in both the Global Poker Index and BLUFF Player of the Year leaderboards.

Are you kidding me?

One of the best?

It was THE best.

Four major titles in field sizes ranging from 17 to 1,499, and more money earned in a single year than ever before in the history of the game ($22m+) – surely ranks as THE achievement of a lifetime.

Colman ignited the poker world in more ways than one. Not only did he engage, excite and elevate the game of poker to a whole new level, but he also pulled his pants down flicked a lighter between his ass cheeks and let rip.

His decision to remain mute in front of that feed the world stack of cash; his decision to bring politics into poker in Barcelona, and his choice to play sticks and stones with Phil Hellmuth also showed that he isn’t a stranger to controversy.

It was a year the likes of which he may never experience again. But right now it’s nothing more than a memory. It’s time to knuckle down and become a great. It’s time to see if he can stand the test of time, or whether he will become the most controversial flash in the pan the poker kitchen has ever sizzled.

Colman’s top honor berth in both the Global Poker Index (GPI) and BLUFF Player of the Year rankings goes to show that the formulas aren’t a million miles apart. That is until you consider that Mike Leah finished runner-up to Colman in the BLUFF rankings, and was only deemed worthy of a 21st place finish in the GPI rankings.