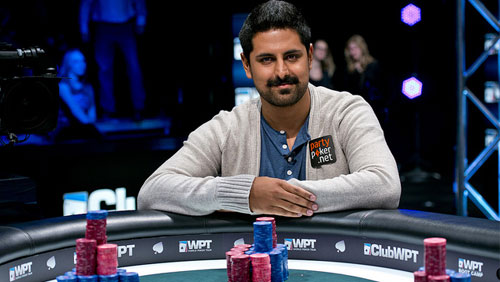 Coming into the World Series of Poker (WSOP) I was walking around the poker world screaming down my tannoy that Mukul Pahuja was going to win a WSOP bracelet. He was one of the most in-form players of the year, and he came away with nothing but a deepish run in the Main Event for a $52,141 score.

The WSOP has never been a happy stomping ground for Pahuja, but the same cannot be said for the World Series of Poker Circuit (WSOPC) event held at the Harrah’s Resort in Atlantic City, where in 2009, the cash game grinder, turned in two impressive performances, and captured a WSOPC gold ring, taking home over $120,000 in the process

That victory gave Pahuja a new vision in life. With his wife at his side they left their childhood home of New York and headed down to Florida to make a living as a professional poker player. The rest, they say, is history.

This week Pahuja returned to Atlantic City – the scene of his poker birth – and he only went and did it again. Continuing the rich vein of form that saw him bag a third place finish at WPT Montreal, a few weeks ago, the World Poker Tour (WPT) Season XII Player of the Year topped a 460-player field to win the $148,345 first prize in the $1,675 WSOPC Main Event.

“It was my first major buy-in,” said Pahuja of his fourth place finish in 2009. “It was a $5,000 buy-in and before everything was standardized as $1,675’s across the board. I remember winning a satellite into that tournament and it was a big jump for me. My prior biggest cash was some small buy-in tournament and I ended up taking fourth for like $70,000 or so. It was an amazing week and kind of introduced me more so into tournament poker. That week here at Harrah’s was a catalyst for me.”

Pahuja’s victory means he will finish the year, the same way that he started it – on a high. He has won $1.5m in live tournament earnings, making him the 49th most successful live tournament player of 2014, and he also has that WPT POY title to boot.

On his way to victory, Pahuja eliminated five players at the final table, including Toole in a very short heads-up match up. Other notables to cash in the event included WSOP bracelet winners Greg Kolo and Brian Lemke who finished 24th and 33rd respectively.