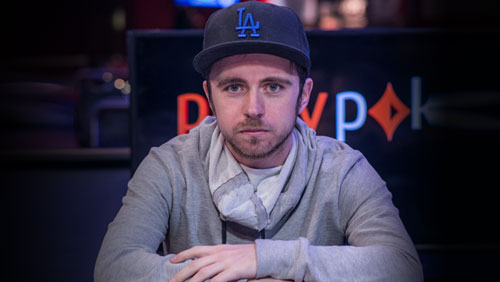 Lee Davy sits down with the 3-time 2014 British Poker Award nominee, Patrick Leonard, to talk about the differences between online and live poker, his habit of being a tad argumentative, and living the life of Riley in Hungary.

Patrick Leonard is a great player to watch playing live. In many ways he reminds me of Sam Trickett. He has more moves than a bowl of jelly, plays a high octane pace, and is great to talk to.

He is also an inspirational poker player who started his journey working in the background. The former journalist spent some time working for PokerStrategy before his online cash game bankroll started to outgrow the one he got from dealing with VIPs.

The rest as they say is history in the making. The former PocketFives World #1 has started to play a few live tournaments: a new environment, a new challenge, with the same results. 2015 is going to a great year for Leonard.

I can feel it.

What are you doing playing live poker?

“To be fair I never play live tournaments. This might be the fifth tournament I have played all year. I had a nice score in the High Roller yesterday {WPT UK} so I may donate some of it back in the next few months.”

Describe the differences between playing online and live tournament poker?

“There are definitely different strategies that you should use. You can’t play live like you do online, and you can’t play online like you do live – especially on Day 1’s. Early, when playing online, you are playing very tight – just folding, and trying to accumulate slowly. When you play live there will be 3-4 people on every table who are ready to give you their whole stack. So I have been limping with hands like 73o because I know if I flop two pair, or some type of funky hand, there is always someone who is ready to give me their whole stack.

“I get more thrills playing online because there is more chance to go deep. Live tournaments are all about getting to the final two tables and that’s only going to happen maybe once every three years. Yesterday, I got lucky. This was the first time I was in the final stages of a big live tournament and the heart rate rose.

“Bryn {Kenney} and I played heads-up and everyone assumed we had done a deal because we were so relaxed. There was a shot taken where he was reading a magazine with a picture of my face on it. We had a lot of fun – the whole table did. No one was taking it too seriously. Everyone was playing quickly, and people were commenting on the rail that this is how poker should be.

“There has been a lot of exposure this year, because of the whole online thing. I am not trying to be bigheaded, but this is how I was eliminated yesterday. There was a raise, and a re-raise, to whatever. I ended up going all-in, and was called off by ace-ten. The guy said he did it because he wanted the fame of knocking me out, which is peculiar because I’m no Sam Trickett.”

Tell me a little bit about yourself?

“I was a journalist and poker enthusiast when PokerStrategy asked if I was interested in working for them in Gibraltar. I was 21 and went for it. When I was there I was dealing with the VIPs. These kids were 18, 19 or 20 and they would always have one thing that they were bad at. Either they couldn’t manage money; they tilted too much, or couldn’t get motivated. I started to learn the bad things they did and tried to eliminate them from my game.

How old are you now?

Still a pup then?

“I have been playing poker for a long time, but I have been getting it quietly playing cash games. I just wasn’t interested in tournaments, especially live tournaments.”

“There a lot of poker players living in Budapest. My girlfriend is Hungarian and that’s the main reason we moved there. It’s also good weather, and cheap to live.”

What are you doing when you are not playing poker?

“I actually have a big stable of players I coach. I am playing less now and coach more. I play for a football team, at a high standard, and train three times a week, and play a match. All the poker crew get together a few times a week and have dinner and talk about the game.”

Have you done any training on how to become a better coach?

“Not really. I don’t watch training videos because I think people coach really badly. My coaching is mainly one on one. I try to ask the right questions so players can figure it out themselves. I will ask one guy a question and then ask another guy what he thinks about the answer? I try to get a debate going, and I think that’s healthy. In poker, decisions are very close. When someone makes a strong point regarding one decision, we try to debate the other option. A lot of people in poker have a very standard way of thinking. I always try to think of ways of being non-standard. I think I am known for being FPS (fancy play syndrome), always trying to take a line that’s different to what other people take.

“Online players are very good at raising and c-betting, etc. But if they are facing something out of the ordinary they will struggle. They know what they are doing online because they are making the same decisions millions of times per day. When they face something they are unfamiliar with it’s difficult for them. It takes them out of their comfort zone.”

“I try too. I am a bit argumentative. Well my girlfriend says I am. I believe I like a good debate. I am trying to play less poker and spend more time in the real world. I have bought a bar in Hungary, so I am going to be working on that. I am not doing it for the money. I am trying to make it a profitable business venture by learning through mistakes. I did the same in poker. If I can keep on learning from my mistakes then more and more of my business ventures will be more successful.”

What are the types of things that bother you in life?

“I am really impatient in traffic jams and stuff. General incompetence infuriates me. Shopkeepers drive me nuts. Anything that’s slow. Live poker is like that sometimes. One of my friends did a coaching session last night with Jonathan Little. He said he never looks at his phone – even in the breaks – because he would always be thinking about what’s on his phone instead of the poker. I like that attitude it’s very professional.”

Professionalism is the key right?

“The days are long. By the last level of the day everyone is making mistakes. If you can keep on top of your game, and be mentally right, you can surely take advantage of that at the end of the event. I read the same twitter message ten times per day. Just go through it at the end of the day and focus on the game during the day.”

“This year it’s a lot less varied because there are more people who are less known such as Jack Salter. I think that’s nice. Jake {Cody}, Toby {Lewis} and {Chris} Moorman are always there and there abouts, but there are a lot of people who will never be looked at because they never come to the live tournaments.

“It’s nice for friends and family. If they know you are just a cash game player they don’t know much about what you do. This year, because I have had some good tournament results, my family can see that on various websites. This time last year there was a rumor going around Newcastle that I had lost all of my money and my parents had to bail me out. It couldn’t have been further from the truth. Now the same people are talking about how much money I have won playing tournaments. I guess being recognized through these rewards gains you a little bit of respect.”

You are going to have to get used to the rumor and gossip the more you are in the public eye.

“There was recently a guy in the UK who had a big outbreak on my blog. He was calling me out for a lot of things I thought was untrue. But everyone is entitled to his or her opinion. I’ve been blogging for seven years. I think the first page on my blog I was playing $5 SNG’s. I blog everyday and it doesn’t matter how little I do in that day. People get to know more about you than you perhaps want them to. It’s like a diary that you have shared online.

“I am 25 now. I was 18 when it started. I had a little bit of arrogance when I was 21-22 and I wasn’t entitled to that. I look up to people like Jake Cody. He’s a good role model. He has been so professional, a great ambassador. I think youngsters watching poker want to be like him and not some loud mouth punter.”