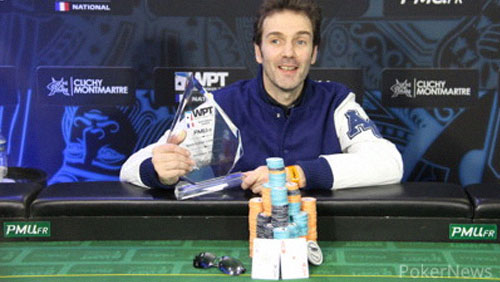 Frenchman Laurent Polito has defeated Carlo Savinelli, in heads up action, to win his second World Poker Tour National Main Events in Paris, in the past three years.

What happens when the French National Judicial Police go a little bit nuts and close most of the poker rooms in Paris? 682 entrants squeeze into Le Cercle Clichy Montmartre for a World Poker Tour (WPT) National Series Main Event creating a total prize pool of €736,550.

Those French boys and girls are starved of poker.

Polito wasn’t the only player to make the final table ahead of a trail of molten lava. The Italian Carlo Savinelli was coming off a year that saw him defeat 2,339 players to win $332,290 in the Italian Poker Open in Campione. Savinelli would add €94,000 to that haul after losing out to Polito in heads-up action.

The third player at the final table, with previous form, was Franck Kalfon. The Frenchman finished fifth at the European Poker Tour (EPT) Main Event in Deauville, back in 2013, and he took €22,500 in this one courtesy of a seventh place finish.

Polito has now earned $1.5m in live tournament earnings. As well as his triple WPT National Series success he also has fine EPT form. In 2011, he finished ninth at the EPT Deauville Main Event for $68,052, and a year later he took the High Roller at EPT Barcelona for $332,017.

That ends the WPT National Series for 2014, and only a PMU.fr sponsored event in Cannes has so far been advertised for 2015.