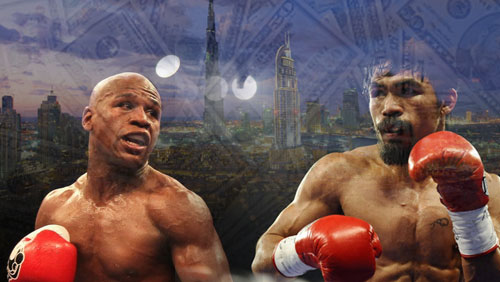 The proposed Floyd Mayweather Jr. – Manny Pacquiao fight isn’t as close to happening now as it was back in 2010 but more and more people are getting involved to try and make it happen. Pacquiao wants the fight. Freddie Roach wants the fight. Network executives from HBO and Showtime both want the fight. Pretty much everybody who has any remote interest in boxing wants the fight. But Floyd Mayweather? Well, we don’t know that yet. For one reason or another, Mayweather has yet to give his blessing on making the fight and without his say-so, this fight has as much chance of happening as me losing 30 pounds in the next three days.

But there’s one thing Floyd Mayweather wants more than anything else: Money.

A group from the United Arab Emirates led by long-time boxing executive M. Akbar Muhammad is stepping up to the plate by offering Mayweather $110 million to face Pacquiao.

According to Muhammad, the combined purse between Mayweather and Pacquiao could fetch close to $200 million and that doesn’t even take into account the massive pay-per-view buys the fight is likely to generate.

“The funding is in place and because of this and the group’s unique and distinctive make-up and backgrounds, it has emerged as the leading and most serious group striving to secure the bout,” Muhammad told boxingscene.com. “I’ve been instructed by the group to do whatever it takes to bring this long-awaited and eagerly-anticipated fight to fruition.”

Unfortunately for Muhammad, “whatever it takes” will only work if both fighters agree to fight. Pacquiao’s made his position known multiple times. The onus now is on Mayweather to do the same. And that’s just on the money side of things.

Multiple reports have said that the Middle Eastern group wants the fight to be held in Dubai, which could pose a myriad of problems for a lot of parties concerned, not the least of which is Mayweather’s long-held insistence to stage all of his fights at the MGM Grand in Las Vegas. Convincing him to fight in Dubai is a tall order, maybe even downright impossible.

But if the Dubai group is fine with having the fight held in the US, an offer of $110 million to Floyd Mayweather Jr. makes it a lot more difficult to comprehend should Money May continue to decline the fight.

If anything, Muhammad is unequivocally confident that both Mayweather and Pacquiao will take home, by far, their biggest purses should they accept the UAE group’s offer.

“There’s absolutely no doubt that each fighter, individually, will receive more money than any other boxer has in the past,” the boxing exec said. “The combined purses are approaching $200million (£127m). And, rest assured, we have the resources to do just that.”

We all know what Pacquiao’s answer is going to be. If money is the root of Mayweather’s makeup, we’re going to find out what his price is for accepting a fight with Manny Pacquiao.