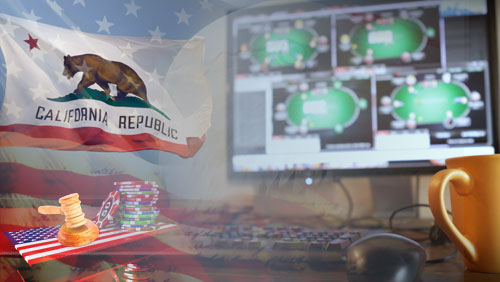 After years of fitful attempts at raising a home grown online poker industry, California may be moving toward some kind of resolution in 2015. Howard Stutz outlined the situation in the Las Vegas Review-Journal earlier this week, calling California “the nation’s Internet poker battleground” for the next year. And what a battleground it’s poised to be. With the middling-to-failing performance so far of most of the operators in Delaware, Nevada, and New Jersey; Ultimate Poker’s closure, citing “ and anti-joy billionaire Sheldon Adelson vowing to spend his entire fortune if necessary to keep Americans from check-raising each other on the internet, online poker as we know it may very well be facing its final stand in the Golden State.

The landscape has shifted dramatically since last year’s fight in the California legislature over a “bad actor” clause to keep PokerStars from entering the market, one which pitted the Morongo Band of Mission Indians and three L.A.-area card rooms, who had partnered with PokerStars, against 13 other tribes protecting their interests. For starters, PokerStars, which is currently waiting to see if will be licensed in New Jersey, is now owned by Canadian company Amaya Gaming, which never accepted American post-UIGEA and therefore wouldn’t be considered a “bad actor.” And one of the tribes that had opposed PokerStars, the San Manuel Band of Mission Indians, has now changed its tune and joined forces with the card rooms and Morongo Band.

With new committee heads to be appointed in early January, and new legislation to consider, the entire process will be started with as clean a slate as can be hoped for. But just passing legislation that gets grinders back to the online tables in California isn’t going to be enough to ensure the long-term security of the industry. In order to secure the future California needs not just to get online, but to do it better than anybody else has since Black Friday.

Managing expectations is a good place to start. Wild predictions about tax receipts fuelled the passage of 2012’s various online poker legislation. Anybody who wasn’t involved in selling such bills to lawmakers was pretty well aware that billion-dollar markets were unlikely to emerge without a national network, but there’s still been plenty of frustration this year over the low online poker receipts in the three legalized states. Using realistic revenue projections before passing a potential online poker bill in California could go a long way toward alleviating similar feelings down the road, making for a more stable operating environment.

Then there’s the player experience factor. Americans playing online poker in the three legalized states have met with a mediocre experience at best, particularly compared to what they were used to playing before Black Friday. Some of this is because of business choices the licensed operators have made, and all legislators can do is hope their operators make smarter decisions for the long-term health of the market. But other bad experiences, such as being shut out of games due to geolocation errors, can be controlled to some degree by the degree of stringency regulators choose to apply to licensees. If the state can also offer assurances to California banks that keep them from being wary about processing payments to state-licensed online poker sites, players will have little to complain about outside of their own results at the table.

Most importantly, though, the urge to go it alone has to fall by the wayside if California wants to count on long-term revenue from online poker. Many of the Californian legislators who have fought over online poker for the last few years have been steadfast in their refusal to consider liquidity-sharing compacts with other states, reasoning that they don’t need the smaller states since they already have the largest market in the country. But with a madman billionaire funding a federal-level crusade against online poker, and the party he favors threatening to take the White House in 2016 and make all his plans realistic, even being the biggest operator on the block isn’t enough to stay safe.

If it insists on moving ahead alone, California is highly vulnerable to losing anything it might gain to federal prohibition. No other state may have the clout in D.C. that California does, but that’s far less valuable to them on their own than it would be to their potential allies. Working to find a way to include other states in their plans would give them common cause, not to mention more representatives and senators in their corner, if Adelson’s plans ever begin to bear fruit in the nation’s capital.

If the state can address these issues and pass a bill that gets Californians back online playing poker again, there will be more reason for optimism than at any point since Black Friday. The thriving brick-and-mortar industry is ready to bring popular brands to a population more than four times larger than any other state that has legalized online poker to date, and a successful online industry could lead to a new boom in live tournament poker via online satellites. But if those charged with turning the issue from politics to legislation falter anywhere along the way, particularly when it comes to playing well with others, the future for online poker in America won’t look very bright at all.