John Eames defeats Matt Berkey, in heads-up action, to take the first prize of $289,706 in the World Series of Poker Circuit Main Event at Planet Hollywood in Las Vegas. 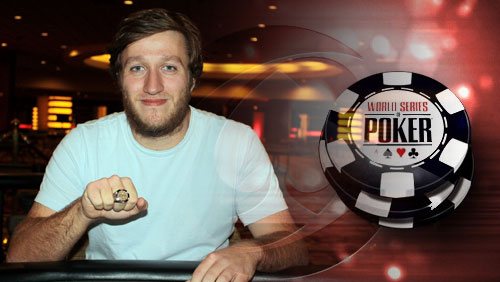 Eames defeated 1,044 entrants to capture the biggest prize of his seven-year career, in an event that smashed its $1m guarantee. It’s the first time that Eames has captured a main event title, and he has now earned over $2m in live tournament earnings.

The British born pro is out in Vegas grinding the cash games and seven days prior to his victory finished 25th in the Heartland Poker Tour (HPT) held at the Stratosphere Casino Hotel & Tower. Despite making two WSOP final tables, this is the first time Eames has ever played in a WSOPC event. He has earned a seat in the season ending WSOP National Championships courtesy of his victory.

For Berkey, it’s another case of so close but no cigar. He has earned over $1.3m in live tournament earnings, but is still chasing that first major title. The same is true for former WSOP final tablists Brad Libson, Corey Emery, and Johnny Neckar – they also made the final table but couldn’t oust Eames from the top spot.

Eames jumped on board the proverbial roller coaster during the final table. He eliminated both Quang Ngo and Johnny Neckar in a three way all-in that saw his lowly looking A5 flop a five to eliminate the A8 and AK of his opponents; and then he eliminated Ping Liu QQ v 33. Liu would flop a set only for Eames to turn a bigger set.

The final hand of the contest saw Eames getting it in with pocket queens on [8d] [7c] [7s]. Berkey was chasing the draw with [9d] [6h], and it never materialized, leaving the bearded Eames with a chunk of change and a shiny new gold ring.