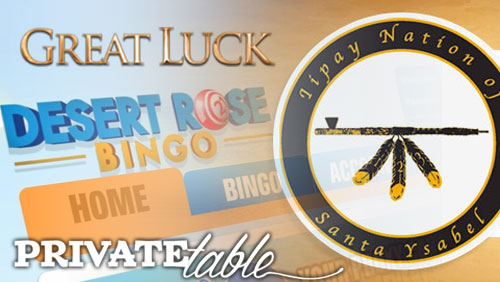 People waiting for news of real money online poker at PrivateTable.com got a shock this week, after the site’s owners, The Iipay Nation of Santa Ysabel, announced plans to launch a real money online bingo offering instead.

Desert Rose Bingo is the result of a relationship between the Californian tribe, and interactive gaming company Great Luck LLC., and in a press release issued by the tribe, they claim to ‘make browser based Class II bingo games available to registered legal users in California Anytime and Anywhere.”

“The Iipay Nation is excited to be the first Tribal government in America to deploy Great Luck’s VPNAPS technology,” said David Chelette, President of Santa Ysabel Interactive, the Tribal economic development entity operating the venture. “As the owner-operator, this licensing agreement not only underscores the sovereignty of Santa Ysabel to offer Class II bingo, it also represents the use of innovative technology to reach users. The Desert Rose Bingo enterprise will offer this small rural community and the Iipay Nation a positive economic impact.”

Class II gaming, as defined by the Indian Gaming Regulatory Act (IGRA), includes poker and bingo, but doesn’t include slot or house-banked games such as slot machines and table games.

“At no time is live bingo game action performed by the user. This ensures that all game play takes place on Tribal lands, under the jurisdiction of the Tribal government and is in compliance with all applicable laws and regulations.”

It seems too easy.

The news is a surprising one after the tribe’s bold assertion that it was going to plough a lonely furrow and open real money online poker on their PrivateTable.com gambling site, despite all forms of online poker legislation going into the trash can at the States government H.Q.

“Today is the start of the next era. Phase I launched today, and Phase II launches soon. Bingo…then Poker! It has begun.” Tweeted Private Table.

Watch this space to see if there is any state reaction to the release of Desert Rose Bingo before you make up your mind.