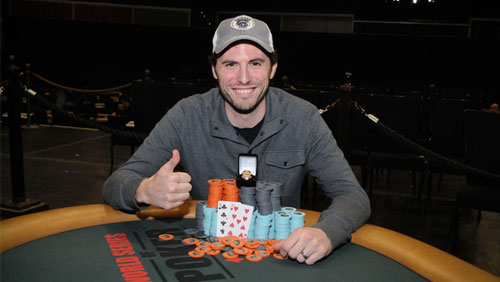 Rob Coventry defeated World Series of Poker Circuit regular, Viet Vo, in heads-up action, to take the first prize of $313,993; the coveted gold ring, and a place in the National Championships, at Horseshoe Hammond .

The 31-year-old futures trader from Cary, Illinois, has had a pretty amazing few months. He became a dad for the first time and somehow managed to slip away from his responsibilities to add $313,993 to the family bank account.

Talking to the WSOP, Coventry said,  “[the ring] is something I will be able to show him and say, ‘this is for you’,” before continuing, “This money is going to go for his future college. It couldn’t come at a better time for my family. That’s what it means to me. I got no sleep last night coming home at 3 a.m. and being up with the baby. It’s been great being a father. I don’t get a chance to play many poker tournaments. This is the one I do every year.”

Coventry was up against it, with four players remaining. Viet Vo was making his fourth WSOPC final table; Telker was as capable as they come, and the vastly experienced Billirakis was the favorite to take his second gold ring (his first came in this very event back in 2008).

After Telker was eliminated in fourth, the trio of Coventry, Vo, and Billirakis, went back and fore for over three hours before Coventry eliminated the main danger to take the chip lead against Vo.

“[Billirakis] really impresses me with his presence at the table. I’ve known him from playing online back in the day. MrSmokey1 was always someone I revered as a top-notch player. It doesn’t get much better than that. To be at the same table with him and see some of the plays he makes. I’m not going to lie, it was pretty intimidating to play against him because you knew he was capable at anytime of putting you in a really, really tough spot.”

Coventry’s victory is his most impressive to date, topping a $55k score he won in a Venetian Deepstack event in 2008. The tournament attracted 1,147 players, making it the fourth consecutive year that the event has attracted over 1,000 players. The $1,720,500 prize pool is the biggest of the season thus far.