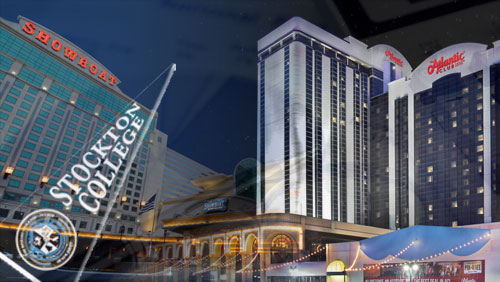 Richard Stockton College, a university based close to Atlantic City, is in negotiations to buy either the Atlantic Club Casino or the Showboat Casino with plans of turning either into a college campus.

Atlantic City Mayor Don Guardian told the Press of Atlantic City about the proposal to turn one of the two shuttered casinos into a campus for 10,000 students, four undergraduate schools and four graduate schools. “In the next couple of weeks, you’ll see they’re either going to end up with the Atlantic Club, which means all the property in that section of town will become the college district, or they’re going to end up with Showboat, in which case the Southeast Inlet is going to become a district,” Guardian noted.

Stockton College’s CEO of External Affairs and Institutional Research Sharon Schulman issued a statement saying that the school continues to “pursue various opportunities in Atlantic City” but that “nothing is definite” at this time. Stockton College President Herman Saatkamp indicated that the campus made an offer to buy the Atlantic Club Casino before it was sold to Florida-based real estate company TJM Properties Inc. for $13.5 million.

Stockton College’s current campus is located in Galloway Township, 13 miles away from Atlantic City. Should the school successfully purchase one of the two casinos, it could reopen the hotel tower as part of its proposed transformation into a college campus. “[Saatkamp] is very serious and so is Stockton’s board about finding a location in Atlantic City that will meet their needs,” Guardian commented.

The AC mayor also disclosed that other parties are also interested in buying one of the two casinos, including a group from China who indicated that its own plans to turn the purchased property into an entertainment complex without any casinos.

“Whatever Stockton doesn’t get, the other company will get.”