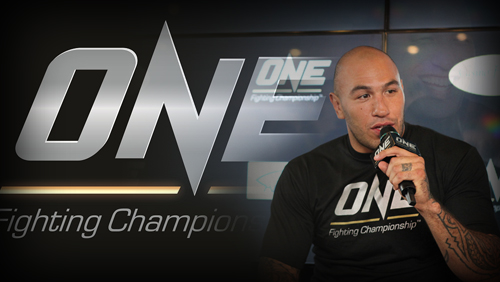 Brandon Vera has been on a media whirlwind tour of the Philippines this week discussing his signing with Asia’s number one mixed martial arts organization OneFighting Championship and their upcoming December 5th Warrior’s Way event at Mall of Asia where Vera takes on URCC Champion Igor Subora. We had a chance to chat with Vera where he discussed his upcoming fight, the importance of fighting in the Philippines and the respect he has for his new company and its CEO Victor Cui.

Joining One FC
Vera was a title contender during his time in the UFC, competing in both the heavyweight and light heavyweight divisions. He’s earned legions of fans who love to watch him fight and would havepreferred to see him fight in the world’s biggest promotion.So when he turned down the offer to re-up for the UFC or accept other offers available to him in the US to sign with One FC, it raised a few eyebrows.

“I did have offers in the US, everyone asks this question,” Vera talking about why he signed with the Asian MMA company, “It’s the people, the biggest factor for me was the respect. The respect that was given and shown from the whole talking (about joining), to the negotiation, throughout the process, even coming here today, they just treat fighters 100% different than any other organization. And I wouldn’t expect anything less from Asia, an Asian company and One FC. If I were to start a company or an MMA organization, it would be exactly like One FC. It’s not because I’m Brandon Vera and because I have a name in the states, they treat all their fighters exactly like this, to me that’s a big deal.”

Vera has a big name and his signing is a coup for One FC. The organization signed former Bellator champion BenAskren,one of the best welterweights on the planet, but Askren didn’t have other suitors lining up, Vera did.

“We fight for a living; we put out bodies on the line,” Vera talking about what fighters go through.

I mentioned that fighters are the ones taking all the risk to make their bosses wealthy and that they should be taken care of accordingly.

While not mentioning anyone by name, Vera’s former boss Dana White has a long history of trying tosubmarineformer UFC fighters who leave the company for greener pastures in other MMA organizations including former two division champion and UFC Hall of Famer Randy Couture, widely regarded as one of the greatest to ever enter the octagon.

“No matter how much control they have over the media or (how they) smear the fighter after, everything coming out of the (fighter’s) mouth is true. The lack of respect that is shown for MMA fighters across the world is coming to a boiling point, a tipping point; I was just fortunate and lucky enough to be in a position where One FC wanted me. I wanted them. We needed each other and it grew into this beautiful thing.”

Smearing of a fighter isn’t something you won’t hear from Vera’s new boss Victor Cui. Cui is a former television executive and long-time fan of the sport. Vera spoke glowingly when asked about the man building the Asian MMA powerhouse. “Mr Cui sat me down for a meeting and we just sat down and talked. We talked about the company; we talked about the beginnings; we talked about the future; we talked about people, everything. All of this was going on while people were leaving (an event), important VIP type people. Victor would say, let me say goodbye real quick and then he’d come back and continue. No other CEO or president of a company does that. That’s impressive, really impressive.”

Vera takes the 16-hour flight from the US about 3 to 4 times a year when his schedule permits. “I really miss the food…But when I’m here, you know it’s quality time even right now when we’re working and doing all these interviews, doing all this TV media stuff,” Vera pauses, “It just feels right, it feels like home. It’s hard to explain to people who’ve never been here and experience. It’s the people; it really is the people.”

December 5th, Vera will be headlining One FC’s Warrior’s Way event held at the Mall of Asia Arena where he will take on URCC heavyweight champion Igor Subora. When asked about headlining his first fightin the Philippines, Vera said it didn’t matter that he was at the top of the card but rather how important it was that his family in the Philippines could finally see him fight.

“Headlining the card is not a big deal to me, just being in the Philippines and fighting in the Philippines is the major thing. Everyone keeps asking what it means to be fighting in the Philippines. Unless you know me, unless you grew up with me, unless you know my family, I can’t explain it to you; the only thing I can explain to you is half of my family has been involved in my fights. Up front, blood sweat and tears. That’s my family stateside. Now the other half of my family gets to be up close and personal with me here in the Philippines. That means I get to bring my entire family into my line of work, into my life, into my culture. And they get to see it first hand what I’m going to be doing and actually be a part of it. And not just that man, for the Asian community, making your family proud and making your family name look good is a huge deal. It’s such a huge deal; my eyes almost water when I talk about that sort of stuff. We grew up, don’t embarrass the family, and don’t embarrass the family. It is and it should always be about the family.”

While Brandon Vera spoke, you could see the love in his eyes for his familyand hearthe pride in his voice. 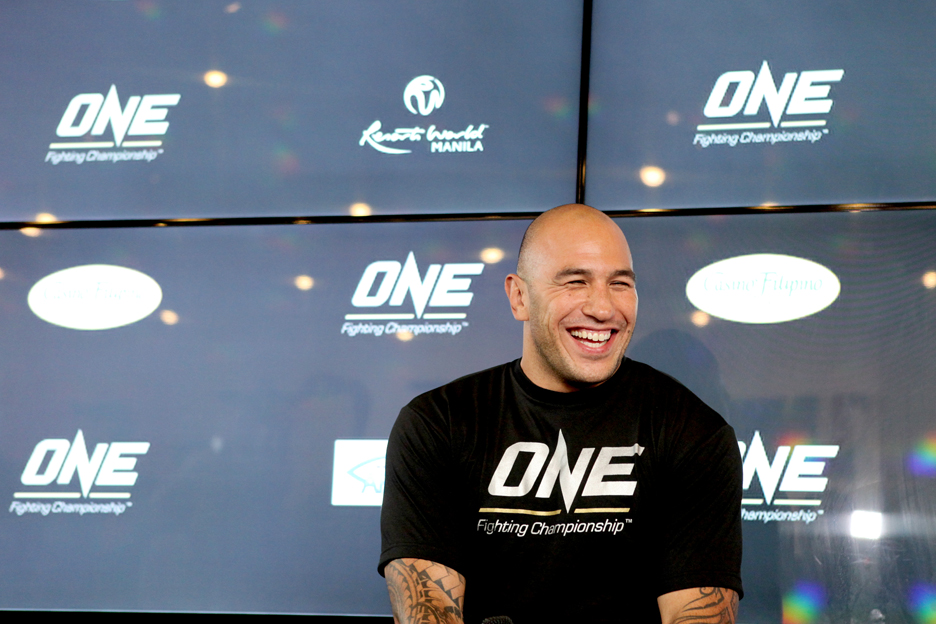 “So, for my family to be able to say yeah that’s my nephew, that’s my cousin, that’s my brother. When my mom and dadcome home, yeah that’s my son. Doing it here in the Philippines where we were all born, that’s a huge proud moment not just for me but also for the whole Vera clan.”

His opponent doesn’t have the worldwide notoriety that Vera holds but don’t think for a minute that Vera is discounting his opponent, “I know Igor Subora is the URCC heavyweight champion and he has a heavy right hand. I’ve seen him knock out two different people with that thing. Both of them were uppercuts that led into other punches but I know he’s got a bomb. He’s been putting people out first round. So, I’m expecting him to come out and try to do the same thing with me. I’m not taking Igor Subora lightly, he’s a champion, and he knows how to win. He knows how to carry himself. He won a belt in an organization that says a lot about him. He trains; he trains hard.He’s for all intents and purposes a local boy, and he’s married to a Filipina woman. He’s from here, so it’s going to be an awesome fight, it will be super cool to fight him.”

Competing with Boxing
The One FC has held four shows in the Philippines with good success but it raises the question in the home of boxing legend Manny Pacquiao and the Thrilla in Manila.Can MMA find a foothold and reach the same level of success and popularity as boxing in the nation with a rich fighting tradition? Vera gives his thoughts.

“I think it’s happening as you and I are doing this interview. Mr. Pacquiao, Congressman Pacquiao, is a small shareholder in the One FC Company. For (Pacquiao) to be buying into an MMA company. For the guy who doesn’t want to fight Manny Pacquiao, Floyd Mayweather, to be talking about starting his own MMA company. It’s happening as we speak, MMA is taking over the world as a dominant sport. The reason being is that everyone can relate to fighting, I don’t care if you’re mother Theresa or the Pope, at one point in your life you wanted to slap the shit out of somebody for something they did or they had to go to the corner and pray about it so they could get rid of those bad thoughts but there was a point in their life when someone did something you wanted to fight them. Everyone can relate.

“To be able to see it happen in front of you and see it play out like a beautiful ballet in most cases, it’s an amazing thing. Most people are drawn to that. There’s all aspects of the fight not just standing in front of each other using two hands, you’re using every single piece of your body minus head-butts but it’s a fight, to the feet to the ground. To getting tired, to sometimes getting cut and bleeding, sometimes things breaking, it’s a fight and everyone can appreciate that.

“It’s happening now, there are MMA Gyms exploding here in the Philippines boxing gyms are starting to get empty because the MMA gyms teach boxing too.”

Pacquiao purchased an undisclosed number of shares in the company back in August of 2014. Cui said at the time to Yahoo.com, “There are a ton of reasons why I’m pretty excited about this. Obviously, Manny Pacquiao is a global sports icon and having him as a part of our organization as a shareholder and promoting One FC and promoting the sport is huge for the sport in the region. It promotes awareness and growth.”

Life after Fighting
Brandon Vera is 37 years old and still a young man by anyone’s standards but in the fight game there comes a time when a fighter has to consider his life outside of the cage. I asked Vera what he had in mind when it comes time to hang it up.

“Honestly, we were talking about the respect with One FC and this company is something I would really look forward to growing into and with. I want to be able to represent the company as an ambassador and do everything and anything I can for (One FC) during and after my fight career. I really wouldn’t mind just being with One FC for the rest of my career, I dig it man, everyone in this company is just bread and butter. Nobody here with an ulterior motive or an extra agenda, no one is trying to pull anything from you or get anything from you, they just tell you want you need to do, what they expect from you and then they just leave you alone. It’s nice. It’s refreshing. It’s a great company; I see this being a blue chip company later on like Apple.”

But how does Brandon Vera see his active-fighting career end?

“As far as my fight career goes, I’ve always said this and I’ll probably say it until I get to that age. I told Mr. Hume, Matt, he told me to call him Matt (One FC match maker and MMA legend). I want to fight my last fight on my 40th birthday. I think I want that to be my last fight. But who knows I might get to 40 and I’ll want to fight until I’m 45.

“All fighters have something wrong with us inside that we don’t talk about, whatever your thing is, is your thing but we have to fight, it’s part of who we are, we won’t go quietly into the night but if it’s still in our hands man, we’re gonna fight.”

You can follow Brandon Vera on twitter @Verafied and you can purchase tickets for One FC’s Warrior’s Way through SM ticket outlets in Manila.