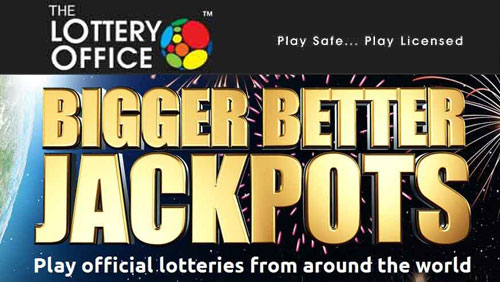 Licensed and regulated operator offers national lotteries from around the world.

The Lottery Office (www.LotteryOffice.com) has launched with a range of international lotteries including the Irish Lottery, EuroMillions, UK National Lottery and all Australian lotteries, with more to be added over time.  Mary-Ann Roche, Manager at The Lottery Office explains one of the key benefits, “Everyone loves a flutter on the lottery, especially when the jackpots hit record levels. A wider choice of lotteries, means bigger jackpots, more often. Previously players could only take part in their National Lottery, now anyone can win.”

Players can be confident in receiving winnings too. The Lottery Office is licensed and regulated by the Northern Territory Government of Australia, meaning that when a player does win that big jackpot they actually do receive the money.

The web site has been designed to work on all major smart phones and tablets as well as the more usual laptops and desktops. “Players can buy a EuroMillions entry in their lounge or on the train to work.” said Mary-Ann

Launching with a generous promotion, The Lottery Office is running a “Buy 1 Get 1 Free” offer for new players.  Any initial purchase made will be matched by a bonus amount of the same value, up to a whopping $500.

In addition to this free prize giveaway, The Lottery Office is also running a “Buy 1 Get 1 Free” offer for new players.  Any initial purchase made will be matched by a bonus amount of the same value, up to a whopping $500.

“We are hugely excited about The Lottery Office bringing a new experience to lovers of lottery around the world” said Mary-Ann. “We provide a safe channel for players to play lottery online, anytime from almost anywhere in the world via their computer and mobile devices with 100% of their winnings guaranteed” said Mary-Ann Roche.

More information can be found at http://www.LotteryOffice.com.