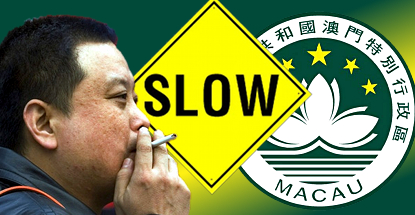 Macau casinos are experiencing a post-Golden Week slowdown that has analysts expressing “concern” for the month’s gaming revenue total. The weeklong Chinese national holiday failed to arrest Macau’s four-month revenue slide, with casinos believed to have suffered a 30% year-on-year decline in gaming revenue despite a 6% increase in visitation. Now Wells Fargo analysts are warning that post-holiday play at Macau casinos is “very quiet” and October’s expected year-on-year gaming revenue decline could top current expectations of 21%.

For the first nine months of the year, Macau gaming revenue is up 5.9% over the same period last year, but not everyone is convinced the numbers will stay in positive territory when the full year is officially in the books. Analysts at CLSA now expect 2014’s FY revenue to fall 1%, which would mark the first annual decline since 2002. (Mommy, what’s the apocalypse?)

FIVE MORE SMOKING LOUNGES MAKE THE GRADE
The month was already dealing with the imposition of Macau’s new smoking laws, which banned lighting up indoors except in VIP gaming rooms and designated airport-style smoking lounges on the mass-market area. Only 12 casinos had their designated smoking areas ready by the Oct. 6 deadline, but Macau’s Health Bureau says five more casinos – including Melco Crown Entertainment’s City of Dreams and Galaxy Entertainment Group’s Galaxy Macau – have since made the grade.

Late last week, Union Gaming Research analysts projected the ‘worst case scenario’ of the smoking ban would be a 3.3% annual reduction in gross gaming revenue and a 6.3% reduction in casino earnings. But the Health Bureau has issued a statement confirming its goal of “totally banning smoking in all enclosed spaces open to the public,” which would include VIP gaming rooms. SJM Holdings’ managing director Angela Leong On Kei, whose company has previously argued for a total smoking ban, reiterated this plea last week, calling the partial ban “a waste of money and manpower.”

UNIDENTIFIED CASINO SCAMMED OUT OF HKD 10M
The September earnings at one particular casino were not helped by the four criminals who scammed the joint of HKD 10m (US $1.3m). Macau News reported that the Judiciary Police had arrested a local gang member who was involved in the heist, which occurred on Sept. 24 at an unidentified Macau casino.

The scam involved a casino cage supervisor, who falsified records to make it appear that an accomplice had deposited HKD 10m into a casino account. The phony high-roller was issued HKD 9m in chips, 7m of which he and two accomplices proceeded to lose over the next few hours. The suspects then withdrew the final HKD 1m and amscrayed. One member of the gang was caught at Macau’s checkpoint with HKD 500k on his person but the supervisor has since vanished along with the other two accomplices. Has anyone checked the nearest smoking lounge?