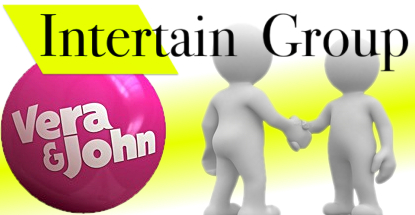 Canadian online gambling operator Intertain Group has inked a non-binding letter of intent to acquire the parent company of Nordic-facing online casino operator Vera&John. The Toronto-based Intertain says it will make an initial payment of €44.5m in cash and €36.5m in common shares to acquire Malta-based Dumarca Holdings Ltd. The final price could range as high as €89.1m but will depend on Vera&John meeting certain earnings benchmarks in 2015 and 2016. Intertain expects the deal to be finalized by December.

Intertain CEO John Kennedy FitzGerald (no relation to Franklin Roosevelt Delano) said the acquisition would provide “immediate accretion and meaningful operating cash flow to our business and gives us access to the growing Nordic markets.” Vera&John generates 75% of its sales from Nordic markets and was one of the 24 online gambling operators recently chided by Norway’s gambling regulator for allegedly disregarding orders to steer clear of Norsk Tipping’s monopoly turf.

FitzGerald also touted Vera&John’s propriety software and mobile platform. Vera&John generated revenue of €25.9m in 2013, up 124% from the previous year. The site expects mobile sales to account for 35% of its revenue in 2014.

The deal marks Intertain’s second major acquisition this year, having agreed to pay up to $82.4m to acquire UK bingo operator Mandalay Media in June. Intertain began life last year after Amaya Gaming sold its Cryptologic Operations division, which included the InterCasino and InterPoker brands, to Intertain for $70m.

Intertain appears to have adopted Amaya’s strategy of growth through highly leveraged add-ons, having now committed itself to spending close to $300m over the past 12 months on three major acquisitions. In August, Intertain reported Q2 revenue of just $5.2m, which was up 80% from Q1. But the strategy appears to be pleasing investors; since listing on the Toronto Stock Exchange in February, Intertain’s stock has risen over 187%.